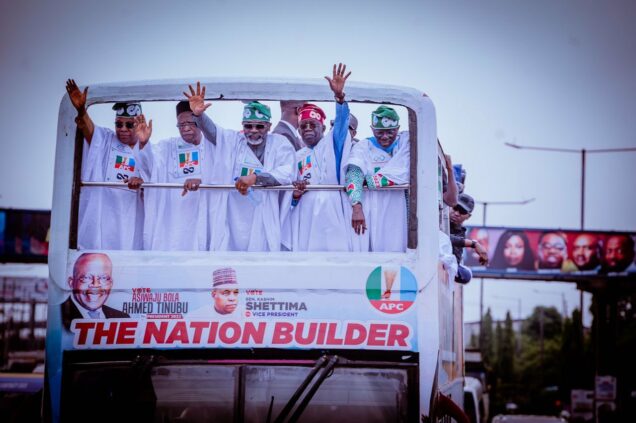 Gbajabiamila: Those doubting Tinubu’s age should meet his late mom for reconfirmation

Femi Gbajabiamila, the speaker of the House of Representatives, said those doubting the age of Bola Tinubu should go to meet his late mom, Abibatu Mogaji for reconfirmation.

Gbajabiamila stated this while addressing supporters of Tinubu at the APC rally in Lagos on Friday.

The speaker told the massive crowd at the Teslim Balogun Stadium to go convince the undecided eligible voters that Tinubu is the best to lead Nigeria in 2023.

He said: We are here today to energize the base (Lagos). This is not the real campaign. Everybody here is Batified so we are here to showcase ourselves. There is a very small group outside, they are called the undecided voters, now I want to talk to those ones through you. They will ask you a lot of questions, I want to tell you what to tell them. They will ask you, Who is Tinubu? tell them, I, Femi Gbajabiamila, the speaker of the House said Tinubu is the greatest politician in modern-day Nigerian politics. They will ask you how old he is, what is his age, tell them, I, Femi Gbajabiamila, said he is the age his mother said he is and If they doubt his age, they should go and meet his mother to reconfirm. They will tell you, but they said he did not go to school, tell them that I said he is more educated than all the contestants put together. They will say, but they said, they want him in America, tell them Americans have said repeatedly that they do not know what they are talking about. But they said he is corrupt, tell them he is the most investigated presidential candidate in the history of Nigeria and nothing has been found on him. When they ask about a Muslim Vice President, tell them that God is moving mysteriously in ways that they cannot understand. If they ask you what has he done to develop Nigeria, tell them he has developed men and women who in turn have developed Nigeria.”

Governor Babajide Sanwo-Olu, who also spoke at the event, thanked Tinubu for being the architect and builder of modern Lagos.

Sanwo-Olu said the enjoyment in Lagos today was created out of the vision of Bola Tinubu.

The governor, however, urged Nigerians to vote massively for Tinuby in 2023.
Share