Tinubu Arrives Kano Ahead Of APC Presidential Rally On Wednesday 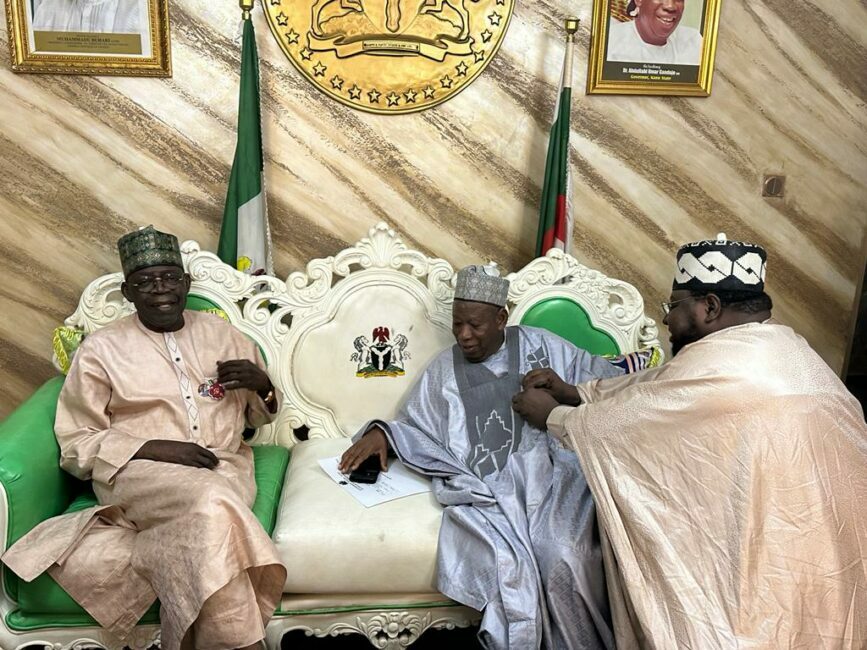 The presidential candidate of the All Progressives Congress (APC), Bola Tinubu, has arrived Kano State Northwest Nigeria, ahead of the APC presidential rally scheduled to hold on Wednesday.

According to APC United Kingdom, which disclosed this in an amateur video posted on its Facebook page, Tinubu arrived the Mallam Aminu Kano International Airport around 1:00 am on Tuesday, alongside Kano State Governor, Abdullahi Ganduje.

The former Lagos State Governor was recently in London, United Kingdom, from where he travelled to Mecca, Saudi Arabia to observe Umrah (Lesser Hajj).

While in London, Tinubu was alleged to have had a secret meeting with the disgruntled G-5 Governors of the main opposition party, the Peoples Democratic Party (PDP) to negotiate support for his presidential bid.

Rivers State Governor, Nyesom Wike, was alleged to have led the other members of the G-5 Governors: Seyi Makinde (Oyo), Ifeanyi Ugwuanyi (Enugu), Okezie Ikpeazu (Abia), and Samuel Ortom (Benue), to the meeting.

The five governors have been at loggerheads with their party, PDP, over their demand that since the presidential candidate of the party, Atiku Abubakar, is from the North, the National Chairman Iyorchia Ayu, should step down for a southerner to ensure political balance.

But reacting in a statement issued by his Media Office and signed by Tunde Rahman, the APC presidential candidate said the media reports about the purported meeting were to say the least, in bad faith but also evil intentioned.

He noted that the reports were published to advance the political interests of the writers and their sponsors, and advised those peddling the rumour to desist from it.

“As usual with him when a year is coming to an end to take time off his busy schedules, take a little rest and proceed to Saudi Arabia to observe Umrah(Lesser Hajj), Asiwaju Bola Ahmed Tinubu was in London during the week en route Mecca, Saudi Arabia.

“While in the United Kingdom, Asiwaju Tinubu noted some articles in some national newspapers in Nigeria, alleging a secret meeting was held in London between him and the G-5 governors who are members of Peoples Democratic Party.

“These reports, to say the least, are not only in bad faith but also evil intentioned. They were published to advance the political interests of the writers and their sponsors,” the statement said.

“But we must point out that the APC candidate is entitled to meeting any political actor or stakeholder that is important to his campaign and plans for the country and that desires to engage with him,” the statement noted.

“We would like to use this opportunity to advise those writing unsubstantiated articles and peddling rumours on him to desist forthwith,” it added.