Uduaghan: 64 garlands for an indefatigable achiever 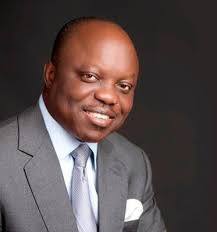 When great men celebrate, even the stars bow in solemn hallow. As the immediate past governor of Delta State and the All Progressives Congress candidate for Delta South Senatorial District, Dr. Emmanuel Eweta Uduaghan celebrates his 64th birthday today (October 22, 2018), the periscope is focused on a man who has given his all to create peace, tranquility and progress for his people and the Niger-Delta region as a whole.

Gradually, the former governor is stepping into the septuagenarian club, healthy, hearty, resolute and focused. As he ages, it is never a dull moment for a man who has spent the greater part of his life to render selfless service to humanity.

Describing Uduaghan as a child of circumstances with a great destiny is like stating the obvious. It is often said that some were born great, while others attained or achieved greatness. For Uduaghan, it is a combination of being born great and working hard to attain greatness.

At 64, Dr. Uduaghan has packed in that relatively old age, a record of achievements that is the envy of his peers. Born on October 22, 1954 in Abigborodo – Warri North Local Government Area of Delta State, his parents Chief Edmund D. Uduaghan and Mrs. Cecilia Uduaghan, may not have imagined the great heights their then little child was destined for. But as the legendary Professor Chinua Achebe would say, a chick that will grow to be a cock is known the day it was hatched.

That wise saying became manifest in the boy, Emmanuel, when he enrolled in Baptist Primary School, Mosogar in Ethiope West Local Government Area of Delta State, between the years 1961 and 1966 marking the commencement of his intellectual quest that saw him pass through the famous Federal Government College, Warri, between 1968 and 1974 and the prestigious University of Benin (UNIBEN) where he studied medicine and graduated with a Bachelor of Medicine and Surgery (MBBS) degree and a Diploma in Anesthesia.

Uduaghan began work in 1983 at the Delta Steel Company, as a medical officer. From 1989 to 1994, he worked in a number of hospitals including Westend Hospital, Warri; Benoni Hospitals, Benin City and Shell Hospital, Ogunu, where he was a Consultant Anaesthesiologist. In 1994 he set up a private medical practice. He has held positions in the Nigerian Medical Association in Warri, Bendel State and Delta State. He was also active in the Junior Chamber International (Jaycees) leadership development organization. A founding member and Chairman of the All Nigeria Congress Association for the Warri South Local Government Area in Delta State, a founder and executive member of the Grassroots Democratic Movement (GDM), and a foundation member of the Peoples Democratic Party (PDP).

A former Commissioner for Health, a former Secretary to the Delta State government and a two-term governor of the ‘Big heart state’. For those familiar with activities in Delta State, you will agree with me that one thing that is synonymous with the name, Uduaghan is development. As commissioner for health, Dr. Uduaghan improved the pay of medical staff and upgraded infrastructure.

For eight years that he was at the helm of affairs of Delta State, the state experienced massive development in all the sectors. His achievements are endless. He succeeded in turning the fortunes of the state around with the available resources. Dr. Uduaghan’s developmental strides speak volumes. Most of his legacies are still being enjoyed in the state presently.

Uduaghan distinguished himself in all the sectors he served. He is arguably one of the most successful politicians the Niger Delta have produced in recent times. His influence and popularity were not earned through a walk in the park, rather by the dint of his determination to make his people happy. His story is a very loaded one, his development efforts also extended to the Niger Delta region even though he was the governor of a state. He was deeply involved in negotiations with Niger Delta agitators and militants alike which let to peace in the region. Of course, where there is peace, there is development.

If one counts every infrastructure dotted all over the state, a greater percentage of them would definitely bear his finger of approval.

Even his ardent critics concede to him that his sojourn in office garnered stellar propensities that have till date remained a yardstick for measuring performance in that resource – rich state.

Uduahan, a man of peace and a man of the people is married to another achiever and distinguished professional, Her Excellency, Mrs. Roli Uduaghan. Their marriage is blessed with two children.

As this enigma celebrates his birthday today, I join other teeming Deltans and Nigerians to wish him a happy birthday and pray that God grant him more strength to carry on’. Amen.

– Julius Akpovire-Enyeh is a Delta-born journalist.