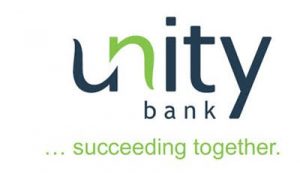 According to the company’s filing with the Nigerian Stock Exchange (NSE), the Bank grew Customer’s Deposit to N263.91bn at the end of the quarter ended September, 2016 indicating an increase of N32.5bn or 14% from N231.4bn as at 31 December 2015; a development that analysts have interpreted as a measure of customers’ growing confidence and increased business momentum.

Furthermore, the various cost optimization strategies and other operational overhauls which were embarked upon by the new Management of the Bank saw operating expense plumet by 14% or N3.1bn to N19.6bn against N22.8bn recorded in Q3/2015.

Overall, the Bank posted a PBT of N3.8bn for Q3/2016, despite the challenging operating environment and economic headwinds. The posted PBT for Q3/2016 was lower than the corresponding Q3/2015 of N10.3bn.

While commenting on the result, the  MD/CEO of Unity Bank Plc, Mrs. Tomi Somefun noted that “economic headwinds stifled business growth during the period accompanied by increased inflation and foreign exchange illiquidity. Nevertheless, the Bank remains firmly committed to delivering value to our stakeholders as the Bank made profit on the back of an efficient balance sheet and cost containment initiatives”.

In addition, she emphasized that the Bank has continued to maintain and sharpen its focus on executing strategic choices aimed at creating a large diversified bank with a strong retail/SME base, development of array of products and consolidating market confidence to boost its growth trajectory”.

According to analysts, with the Bank’s repositioning efforts and consistent focus to tap into the emerging opportunities in the enlarged financial services space within Nigeria, Unity Bank is poised to deliver quality banking services to emerging sectors in Retail/Small and Medium Enterprises, Commercial and the Agricultural value chain. The Bank currently has over 240 branches spread across all the six geo-political zones of the country and leveraging on its e-banking platforms and other delivery channels to meet customers’ expectations.

The Bank is said to be building strong infrastructure for retail banking and the ongoing transformation initiatives will surely consolidate Unity Bank as a retail bank of choice, culminating in superior financial performance and value to all stakeholders.