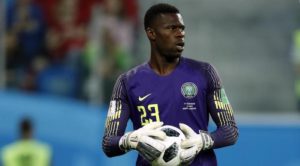 Nigeria’s first choice goalkeeper, Francis Uzoho, who is on loan at Anorthosis Famagusta has been suspended for one game by the Cyprus Football Association (CFA).

The Cypriot FA yesterday upheld the appeal filed by Apollon Limasol who challenged the fielding of Uzoho by Famagusta. Limasol insisted in their protest to the CFA that the Deportivo La Coruna goalkeeper on loan at Famagusta played the debut match with an invalid health certificate procured for him without going through necessary medical.
Apart from the suspension, Uzoho who has already missed Famagusta’s last weekend game is to pay a fine of €1,000 (about N400,000) while his club has been slammed with six-point deduction in addition to forfeiting the three points in the disputed match it won 1-0 to Limasol.

But in a swift move after the CFA announced it verdict in the dispute, Famagusta confirmed they will appeal against the nine-point deduction.

In a statement on the Anorthosis website, the club said it will ask the CFA to postpone its final regular league game while an appeal is lodged.

The overall deduction of nine points has seen the club drop into the bottom half of the 12-team league, which sees six clubs play each other twice more to decide who is relegated.

That leaves the top six clubs to complete their seasons against each other to decide the Cypriot champions.

When contacted by BBC yesterday, Uzoho and his representatives declined to comment on the situation.
Uzoho joined the Cypriot giants on loan from Spanish side Deportivo La Coruna on deadline day, in search of top-flight football ahead of the 2019 Africa Cup of Nations.

Capped 12 times by Nigeria, he played all three matches as the Super Eagles exited the 2018 World Cup in the group stage.

In October 2017, Uzoho became the youngest foreign goalkeeper to ever play in La Liga and marked a memorable Deportivo La Coruna debut with a clean sheet.

Uzoho was part of the victorious Nigeria squad at the 2013 Under-17 World Cup in the United Arab Emirates, albeit without playing a single minute at the tournament.

He only arrived at Deportivo from Qatar’s Aspire Academy in January 2017.