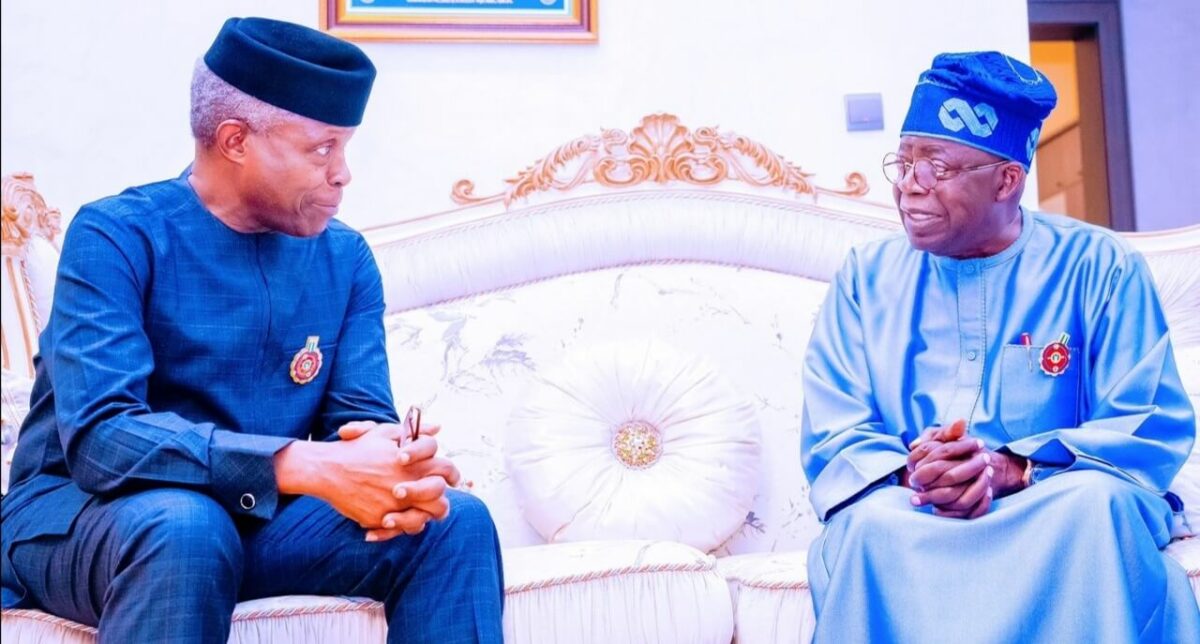 Nigeria’s Vice President, Yemi Osinbajo, visited the All Progressives Congress (APC) presidential candidate, Bola Ahmed Tinubu, at his residence on Wednesday in Abuja.
Laolu Akande, the Vice President’s senior media assistant, shared photos from the visit on social media but clarified that it was a “friendly visit” and not a political meeting.

“Vice President Yemi Osinbajo stopped by for a friendly visit at the Abuja residence of Asiwaju Bola Tinubu just now.

“At the meeting, VP and Asiwaju exchanged pleasantries in the spirit of the season. And in response to media inquiries whether this was a political meeting, it was not,” Akande tweeted.

The Vice President’s visit came about two months after Tinubu paid a similar visit to him at the State House.

Osinbajo and Tinubu were believed to be feuding over the APC presidential ticket that was contested by both of them but eventually won by the latter.

After the APC presidential primary election, Tinubu said at a gathering that he had forgiven the Vice President, saying “I have nothing against him (Osinbajo). I have been to his house after the primaries. I saw him on the day of the goodwill message [at] the retreat organised by the president. And a man who forgives, a man who asks for forgiveness from Allah fully deserves forgiveness. If you cannot give forgiveness, how are you asking from Allah? To me, it is over.”

But an Osinbajo support group took offense in Tinubu’s statement, saying the APC candidate’s use of the word “forgive” was derogatory to the VP’s person and office.

The group said Osinbajo did not commit any offence against Tinubu for the ruling party’s presidential ticket during the primary election held in June.

“…any attempt to take a revisionist perspective by insinuating that an offence had been committed because a sitting VP decided to run for the Office of President is an unmitigated insult, completely unnecessary and such narratives ought to be totally discouraged,” said the support group.