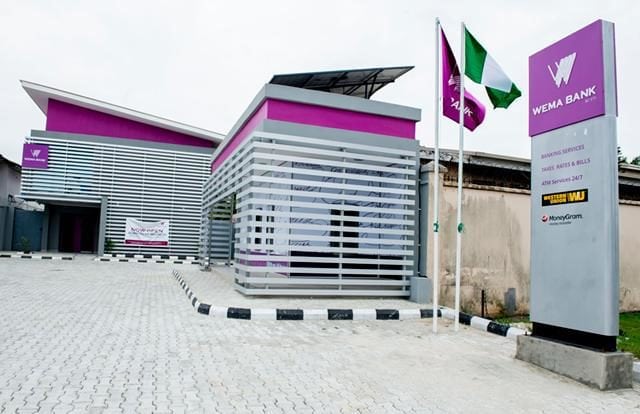 A Federal High Court sitting in Lagos south west Nigeria has adjourned for continuation of trial, the N7,274,75,000 billion suit instituted against Wema Bank Plc by its former Managing Director Jeremiah Adebisi Omoyeni over his alleged illegal removal from office.

In a quest to redress the alleged illegal termination of his appointment, the former boss of Wema bank Plc, Jeremiah Adebisi Omoyeni, in a sworn affidavit filed before the court alongside his statement of claim averred that, he joined the services of the bank in 1987 as officer vi being entry-level for fresh graduate then.

He stated that his promotion was sequel to hard work, dedication to duty, unflinching loyalty to constituted authority and exemplary leadership style he exhibited in the discharge of his duties. In addition throughout the twenty -one years of service period he had with the bank, there was no single occasion where he was queried or cautioned on any act of financial impropriety or misdemeanour.

The plea for his return to the services of the bank’s service was essential to ensure that the bank which was then in crisis was not liquidated due to the fact that it was just less than a month for the bank consolidation exercise to lapse.

Pursuant to the request of the Board of Odua group and upon his return to the services of the bank he was duly appointed the managing Director /Chief Executive of the bank, and with his eighteen days in office he was able to conclude the consolidation exercise of the bank in line with directives of the Central Bank of Nigeria, otherwise, the bank would have been liquidated at 31st of December, 2005, and since his return to the bank, the profile of the bank continues to rise in all parameter.

Consequently, he shall contend at the trial that he is entitled to payment of N1,516 250 000 being his total emoluments for ten years as he was disengaged from the services of the bank at the age of fifty years.

Sometimes between late 2006 and early 2007 the then board of the bank discovered some persons including certain officials of the Central Bank of Nigeria with vested interest in the bank and had perfected plans put in motion adequate measures at ensuring the grounding and eventual liquidation of the bank with view to buying it over by themselves or sell it over to their cronies at ridiculously low rate.

Pursuant to that discovery the then board of the bank pass a resolution directing the then Chairman of the board to petition the then the president of the Federal Republic of Nigeria of the unbecoming attitude and conduct of One Tunde Lemo, who at a point in time was the Managing Director of the bank and was then the  Deputy Governor (financial surveillance) of the CBN in  unduly interfering with the running and administration of Wema bank.

As a result of these unwholesome and unwarranted crises injected into the bank by these persons with vested interest and which crises resulted into several lawsuits and impasse in the running and management of the bank the CBN under the leadership of Professor Chukwuma Soludo as the then the Governor of CBN on the 18th of November 2008 placed him on an indefinite suspension under the guise of giving NDIC  opportunity to undertake routine examination of the bank’s books of account.

His suspension from office was without regards and utter disobedience to subsisting order of the court and the directive of the Attorney General of the Federation and minister of justice.

Thereafter he made a former complain to the President of the Federal Republic of Nigeria, while in the same vein a board member of the bank Chief Wole Olanipekun SAN who was not satisfied with the action of the CBN Governor and with persons with a vested interest in the bank in unduly interfering with the running  and management of the bank, also petitioned the then President complaining of what was transpiring in the bank,

Similarly members of the board of the bank also petitioned the president of the Federal Republic of Nigeria.

Further to the above and in a bid to resolve the prolonged crises several meeting of the stakeholders were held culminated into successful negotiation and execution of the memorandum of understanding.

However, contrary to all expectations and in apparent breach of the terms of the memorandum of understanding, the central bank of Nigeria through the then Governor of the apex bank, without complying with the law and acting in breach of natural justice and fear hearing purportedly issued a press release on 4th September, 2008 with a view to removing him from office, thereafter Wema bank in a bid to give legal backing to the illegal acts of CBN vide its letter of 23rd October, 2008  resolved to terminate his appointment with the bank.

The plaintiff is contending that the purported termination of his appointment with the bank is illegal, unconstitutional, null and void and offends the provisions of the company and Allied Matters Act CapC. 20 law of the Federation of Nigeria 2004,constitution of the Federal Republic of Nigeria 1999,and the memorandum and Article of Association of the bank.

The plaintiff is contending further that, the unlawful termination of his appointment has adversely affected, tarnished, and reduced his reputation and standing generally and particularly in the banking industry both nationally and internationally due to the fact that the entire episode leading to the termination was caused to be published in several Nigerian newspapers and other media international circulation by the bank.

Consequently, his claims against the bank are as follows

The sum of N758,125,000 being the amount due and owing to  him as at date for his illegal and unwarranted removal from office by the bank.

The sum of N1,516,250,000 being his total emoluments for ten years having been relieved of his employment by the bank at the age of fifty, ten years before attainment of the retirement age of sixty.

Interest on the two sums above at the rate of 21% per annum.

General damages in the sum of N5billion.

Cost of this legal action.

However, in a statement of defence and counterclaim filed before the court by Wema bank Plc, the bank denied almost all the claim of Mr Omoyeni, and alleged that his tenure in office was marred by financial improprieties and gross abuse of the rule of corporate governance.

Mr Omoyeni was also alleged to have failed to withdraw all the lawsuits filed by him and his cronies as contained in the memorandum of understanding to pave way for his recall when he was suspended, rather he forcefully took over office as the Managing Director of the bank.

Consequently, the Governor of Central bank on 4th of September, 2008 in the exercise of its statutory powers under the bank and other financial institutions Act BOFIA removed him from office as Managing Director /Executive officer of the bank, therefore, the bank cannot by its action or inaction override or act to its regulatory authorities.

In its counterclaim, the bank alleged that the former managing Director utilized N450million, the said upfront /amortised housing allowance was not authorized by the board of Directors of the bank.

The bank is counterclaiming against the plaintiff for payment of the debit balance of N364,998,307.15 as at 26th May 2009 with an interest of 20% per annum until judgment and thereafter 10% until the same is liquidated.