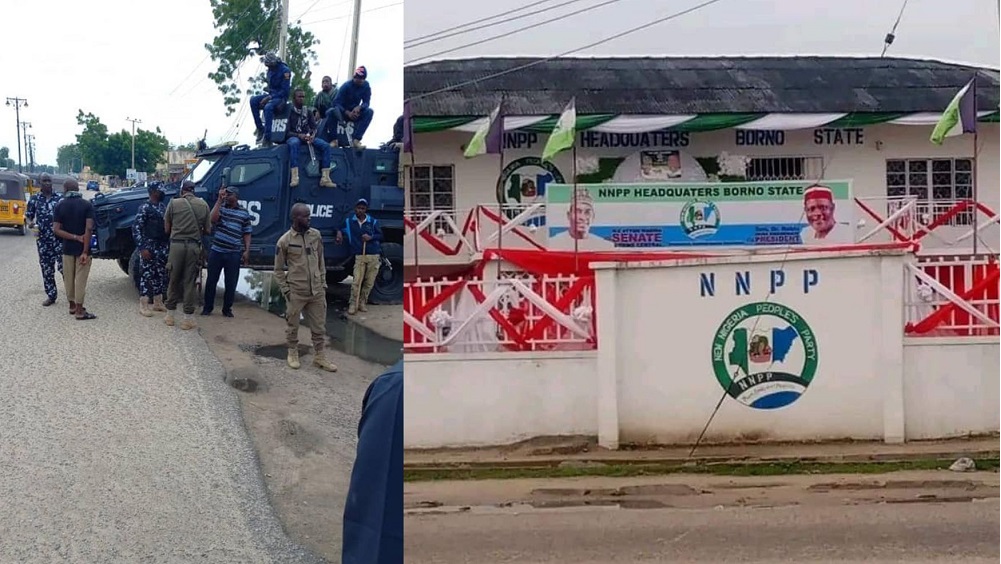 The state headquarters of the New Nigerian Peoples Party in Borno state has been reportedly reopened after a combined team of security operatives led by the Nigerian Police sealed it off on Thursday.

Media Aide to Senator Rabiu M. Kwankwaso, the NNPP’s presidential flagbearer, Saifullahi Hassan, made this known in a post via his Facebook page on Friday.

Recall that on Thursday, Kwankwaso’s Media Office in a statement signed by Muyiwa Fatosa, accused security operatives of destroying facilities, beating, injuring and chasing out group of staff, party members and supporters “on the heels of the visit to Borno State by the NNPP national leader and Presidential Candidate, HE Sen. Rabiu Musa Kwankwaso, PhD FNSE to commission the office in two days time, Saturday 27th August, 2022.”

But the Commissioner of Police in Borno, Mr Abdu Umar, told NAN that “The Police are there to ensure there is no breakdown of law and order,” in view of an issue between the NNPP and the Borno Urban Development Board regarding the former’s conversion of a residential building into offices.

But one of the spokesperson of the Kwankwaso campaign, Ladipo Johnson, said on Radio Now 93.5 Fm on Friday, 7 am program that “he who asserts must prove” that due process was not followed by the party in the state regarding the use of the office for election purposes.

“The issue now is whether politics is a commercial activity and why the government has waited thus far to do what they did. It is mere harassment. We are reaching out to the police and everyone concerned” he said.

Hassan posted on Facebook that the office has been reopened.

“Borno state @OfficialNNPPng party secretariats closed down yesterday reopened with a strong apology from the Governor. We thank Nigerians for joining us to condemn in unequivocal terms the barbaric invasion. We are moving forward, “ he stated.

@@dailyrecordng
Previous ‘The Good, The Bad Are In NBA’ – Akpata Says During Handover Ceremony To New President, Maikyau
Next Lawyer Convicted By Akwa Ibom CJ ‘Feels Sorry’ For His ‘Oppressors’ After Release From Uyo Prison