Why senators are solidly behind Saraki — Sen Sabi Abdullahi 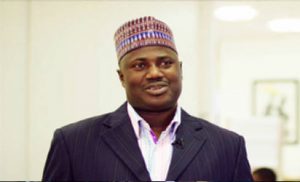 In this interview, he spoke on what the Senate would do if President Muhammadu Buhari fails to assent to the bills passed by the National Assembly, the amendment on order of elections, and Asiwaju Bola Ahmed Tinubu’s reconciliation assignment in the ruling All Progressives Congress, APC.

What is going to be the next line of action if the President refuses to assent to the Peace Corps Establishment bill that has been passed by the National Assembly?

By procedure, if a bill passed by the National Assembly is not assented to, the constitution has provided avenues through which the legislature can come back and gather a two-thirds majority of both chambers, pass the bill again and then it becomes law needing no assent of Mr. President. That I think was what was done on the issue of the NDDC law, for example.

In this case, as much as many of us are aligned with the need to have the Peace Corp and we believe that it will provide another layer of dog watch in our security system. The bill says they are not going to be part of the Ministry of Interior but the Ministry of Youth and it is designed to support the youths in many ways through engagements, and volunteerism among others.

Personally, I see it as a very good thing, it is not new, it is happening in many other countries and that was why in the first instance, the National Assembly supported it. Let’s see, we don’t work with speculations and we don’t work with hearsay until it happens. We know that there is a line of communication, Mr. President will write us giving reasons he is not going to sign the bill or withhold his assent.

Against the backdrop of what happened last Wednesday during the passage of the order of election timetable bill, is there a faction in the APC in the Senate?

There is no faction whatsoever. It is purely a function of everybody expressing his opinion and we are politicians. I am a member of APC and just like any other member of APC, we support and respect our President. And so I don’t think the issue is one of faction, division or whatever. There are so many other bills or even motions that we passed where some people will say ‘’aye’’ and others will say ‘’nay’’ and the thing goes. Does that indicate a split? No, it doesn’t, it is a normal occurrence in a democracy and the arrangement that we have.

Some Senators walked out, claiming that the whole thing was targeted at President Muhammadu Buhari…

That is their view, I don’t know about that. I have never been part of anybody sitting down to say that we should do this because we are targeting the President. So, I don’t know what they are talking about. Maybe they have information that I don’t have but I don’t think it is about that because basically for us in the Senate, we passed our version of the Electoral Act Amendment a year ago and we wanted the House of Representatives to concur, they said no because they also had their own in the works. So in circumstances like that, we had to wait for them to finish. When they finished, one of the major differences was the sequence of the election. Like I said, fortunately, or unfortunately, whichever way you look at it, by our legislative procedure, the moment we come together, there is concurrence or  conference, which are two different things.

Concurrence means they don’t have a similar bill with us but they have done so much legislative work and we are bound by legislative reciprocity to accept that our colleagues at the other side have done a thorough job and we should accept it except if we see one or two things then we may decide to say no. So, we have a way of harmonizing that and we concur with those minor amendments. But in this case, they passed their own bill, and we passed our own. The next thing is to have a joint conference committee chaired by a Senator and this was what happened. By our rule, where they have proposed a clause, which is not in our own or we propose a clause which they do not have, we cannot talk about a merger or try to marry the two, we have to talk about adoption. If you look at the report that is exactly what happened. Naturally, I think this was not part of what we discussed in the Senate but by procedure, we harmonised two bills in a joint sitting. I thinking that some of the people making those complaints, perhaps, do not have deep knowledge of the procedure. Will the Senate get over this? Absolutely. There is nothing difficult that politicians cannot sit together and talk over. They are saying they have 59 members… I don’t know about that and I think the issue, unfortunately, is not about having members and I wouldn’t want us to start blackmailing each other. What is important for me is I am a member of APC irrespective of the crisis. Have you seen any member of the APC coming out to tell you that I don’t like Mr. President? No. So, I wouldn’t want to go into anything that will aggravate our condition. I would rather want to toe the line of resolution of our little internal crisis and I believe a lot of talks and engagements are ongoing among our leaders at various levels and I have every conviction that we shall get over this storm. Your party, APC, has just set up a committee headed by Asiwaju Bola Tinubu to reconcile aggrieved members. What is your take and what do you envisage? As a Muslim, I am guided by my faith and practice of my prophet which says anytime you see people trying to make peace, encourage it, urge it and support it.

So I am totally in support of any peace move within the party. And of course it is a decision Mr. President has taken, we have always said that he is the only one that can bring about peace because he is the father of all, he is our leader.