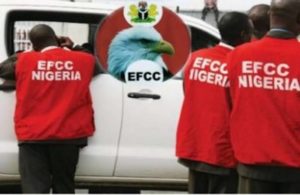 Justice Taiwo Taiwo of the Federal High Court sitting in Abuja, on Monday, granted the EFCC’s prayer to freeze the FCMB Operational Account number: 0998552074 of the Bauchi State government.

The EFCC, through his Counsel, Abubakar Aliyu, in an Exparte Order with file number: FHC/ABJ/CS/858/2019, sought the order of the court to freeze the account pending the conclusion of the ongoing investigation by the commission.

The judge ordered the EFCC to, within 21 days, notify the respondents; the Bauchi State government and the FCMB about the court’s decision.

The judge, however, adjourned further hearing until Sept. 3.

Earlier, counsel to the EFCC told the judge that the commission was investigating a money laundering case in which the account featured prominently.

He said many non-existent companies were used to transfer funds from the account.

”My Lord, about N19.8 billion cheques were raised on the eve of transferring power to the new government for purportedly non-existent contracts and other grants,” he said.

According to him, the Accountant General is still a signatory to the account and they are still trying to access the money.

”They have other accounts and we have tagged this as exhibit 22 and 23,” he said.

Responding to the judge’s question on how long the investigation would take, the counsel said: ”My Lord, investigation is like a pregnant activity. If My Lord will give us 21 days, we will be grateful.”

”I have patiently listened to the counsel’s prayer. I, therefore, grant the order sought by the applicant as prayed.

”Meanwhile, the parties concern must be put on notice within 21 days of the order of this court,” Justice Taiwo held.

In the suit filed, the EFCC had claimed that the immediate-past government in the state was involved in money laundering for which it deployed the account.

The EFCC stated that it needed to have the account frozen to preserve the funds being held in it.

An official of the EFCC, Yakubu Sani stated in a supporting affidavit that “it is a fact that between the 24th and 28th day of May 2019, the applicant received intelligence that the then outgoing government in Bauchi State initiated a process at overdrawing to launder the sum of N19,897,809,334.08 property at Bauchi State Government.

”The actual amount in the sand bank account is N11,500,000 000 00 which was paid to the Bauchi State Government by the Federal Government of Nigeria via the Central Bank.

”The process of laundering employed by the suspects includes the issuance of mandates and cheques rose to the First City Monument Bank (FCMB) for the payments at non-executed contracts and fictitious claims to individuals and contractors.

“The Bauchi State Accountant General is one at the signatory that clears the said cheques and mandate for said suspicious payments and still remains a signatory to the said account under investigation.

”Based on the intelligence received, attempts were being made to activate the withdrawal of such funds while still under investigation by the current Government of Bauchi State

“The investigation has since commenced and the applicant deems it necessary to cause the said bank account and funds to be frozen pending the determination of the investigation therein.

”Freezing the said bank account and funds will greatly assist the applicant to get to the root of the matter and conclude its investigation timeously.

”Deflating the said funds by way at withdrawal will greatly obstruct the applicant from getting to the root of the matter and conclusion of the investigation timeously.

”The applicant needs to obtain the order of this court to cause the freezing of the said bank account and the funds therein.

“This honourable court has the jurisdiction to grant this order and it is in the best interest at justice to grant this application.”