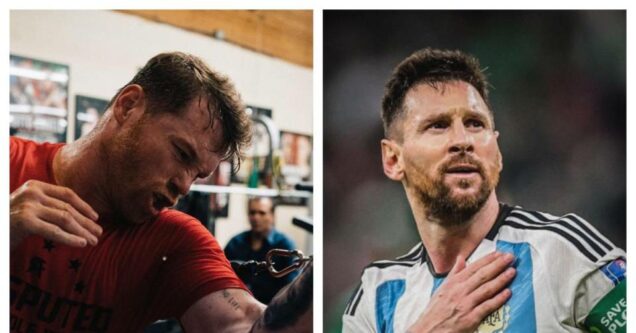 Argentina kept their hopes of being crowned champions alive with a 2-0 victory over Mexico, Messi scoring the opening goal with a sublime finish from outside the penalty area.

Messi has incurred the wrath of boxing superstar Canelo after footage emerged of the Argentina captain with either a Mexico shirt in front of him on the floor in the dressing room during the post-match celebrations.

As Messi pulled off his boot, he appeared to have caught the shirt with his foot and Canelo was not impressed.

“Did you see Messi cleaning the floor with our shirt and flag ???? I ask God that I don’t find [him]!!” he posted on Twitter.

The Mexican fighter added: “Just as I respect Argentina, you have to respect Mexico!! I’m not talking about the country [Argentina] I’m talking about Messi because of the b******* he did.

Canelo wrote in another social media post: “Since the Mexico shirt is on the ground, it’s already an insult. Stop b*******ing about what was or wasn’t.”

Argentina go into their final Group C game against leaders Poland knowing a win will put them into the round of 16, while a draw will be sufficient if Mexico draw with Saudi Arabia.

Mexico need a win to have any chance of progressing, while they also need a helping hand from Poland.