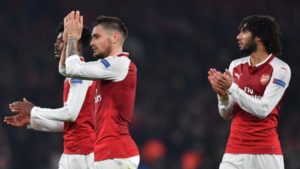 Riding high until two weeks ago, Arsenal’s season has taken a sudden downturn that has thrown the focus firmly onto the club’s plans for the January transfer window.

Prior to the visit to Southampton in mid-December, the Gunners had gone 22 games without defeat and while form had been more patchy since the end of October, the trajectory of Unai Emery’s side was undeniably on the up.

Defeat at St Mary’s Stadium, however, triggered a run that has brought just one win in five games, including Saturday’s humiliating 5-1 defeat at league leaders Liverpool.

With Chelsea winning at Crystal Palace a day later, Arsenal now sit five points off the top four and anything less than three points in the home meeting with fellow London side, Fulham today will further undermine the club’s hopes of reclaiming a place in the Champions League.

Arsenal have started to appear increasingly vulnerable at the back, a weakness that was ruthlessly exposed by Jurgen Klopp’s side at Anfield.

The sight of his defenders chasing shadows and failing in their attempts to constrain Liverpool’s thrilling front three will have made painful viewing for Spanish manager Emery and came just three days after Stephan Lichtsteiner’s mistake had gifted Brighton an equaliser in the 1-1 draw at the Amex Stadium.

Injuries haven’t helped with defenders Nacho Monreal, Hector Bellerin, Rob Holding and Shkodran Mustafi all missing the trip to the south coast, while Laurent Koscielny is still feeling his way back to form and fitness after an extended lay-off.

Mustafi returned for the Liverpool game yet while the changes to the back-line have done nothing to help the team establish some stability, Bernd Leno insists injuries cannot be used as an excuse following the Liverpool defeat.

“We have to look forward because we have another important game on Tuesday. It’s the first game of the year and on Tuesday we want to beat Fulham at home. We need to win,” said Emery.

Everton forward Richarlison should be fit after suffering a knock during the weekend defeat at Brighton.

Winger Ademola Lookman, who has missed the last three games with an ankle problem, will be assessed before today’s game against Leicester.

Leicester are monitoring Jonny Evans and Wes Morgan, who both missed the defeat to Cardiff due to illness.

Hamza Choudhury, who was rested for that game, is expected to return to the squad, but Daniel Amartey (ankle) and Matty James (Achilles) remain out.

Cardiff City manager, Neil Warnock has no fresh injury concerns for the visit of Tottenham.

Forward Kenneth Zohore remains sidelined by a thigh injury while Joe Bennett and Nathaniel Mendez-Laing could come into contention.

Tottenham right-back Serge Aurier could return to the squad, having returned to fitness following a groin problem. But Victor Wanyama, Jan Vertonghen, Mousa Dembele, Eric Dier and Erik Lamela are set to miss out again.