Youths kick-off jogging from Yenagoa to Lagos for Tinubu 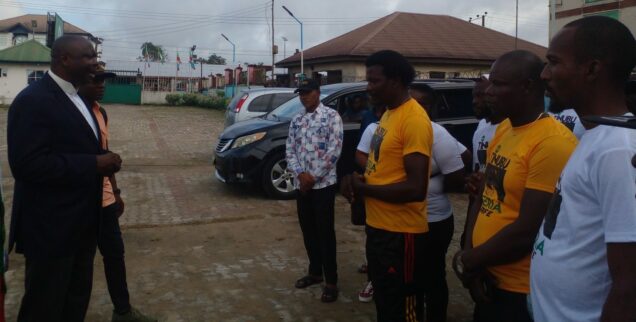 Youths kick-off jogging from Yenagoa to Lagos for Tinubu

All Progressives Congress (APC) youths in South-East and South-South regions on Thursday commenced jogging from Yenagoa to Lagos to drum support for the party’s presidential candidate, Bola Tinubu.

The youths, under the auspices of South-East/South-South Jogging for Tinubu Campaign Initiative, constituted a team of fitness enthusiasts to embark on the 6-day exercise.

The jogging was flagged off at the Bayelsa secretariat of APC by the Bayelsa Chairman of the party, Dr Dennis Otiotion.

Addressing the team shortly before take-off, Otiotio applauded the youths for volunteering to drum support for the Tinubu/Shettima presidential bid, adding that the gesture was an indication that Nigerian youths desire Tinubu.

He noted that sports remained a veritable tool for youth development and mass mobilisation, which brought youths from 11 states of the South-East and South-South geopolitical zones.

Otitio said that it was impressive to observe that APC youths initiated the jogging from Yenagoa, an indication of the support from the state for Tinubu’s presidency.

Earlier, the Coordinator of the support group, Mr Sam Adaga, told Otiotio that the 25-member team drew at least two representatives from each of the 11 states in the South-East and South-South and the executive of the group.

He explained that the aim was to raise awareness amongst the populace across settlements along their route from Yenagoa to Lagos.

He said that eight members of the joggers are female.