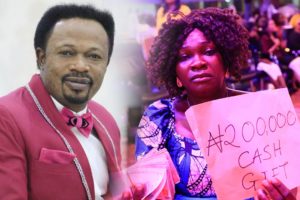 Renowned preacher and senior pastor of Champions Royal Assembly, Abuja, Bro Joshua Iginla in his usual manner has blessed a helpless widow who attended the Service of Stars at the Champions City of Wonders with a cash gift of N200,000. The man of God also announced scholarship award to four of the widow’s six children for life.
The turnaround came for the woman and her family members at the church service which held at its headquarters on Sunday, 8th of April 2018. Having lost her husband five years back, the woman had been catering for herself and her six children without help from anywhere. She neither had a job nor any means of taking care of them, to an extent that she would be contemplating suicide.
However, help came unexpectedly when Bro Joshua Iginla, who has penchant for touching lives, located her through prophecy during the service and offered her what could pass as a lifeline.
After she lost her husband, there were lots of unfulfilled promises from family, friends and sympathizers which left her helpless and wretched.
Her eldest child had completed his education but could not go further due to lack of funds while two of his siblings had to take refuge with her friends in an effort to ease the burden on her. In fact, it has been from affliction to depression ever since.
During the Moment of Prophecy, when the man of God located her, she narrated her ordeal as revealed to him by God through prophecy and explained how her husband had passed on leaving six children with her. The revered man of God prayed for her, terminating the spirit of premature deaths in the family.
A little kindness goes a long way, but this was more than the widow had bargained for.  Her children would return to school without worries of paying their tuition.
Watch video here:http://www.youtube.com/watch?v=yMCB2q8EtLk&t=508m33s
Bro Joshua Iginla has been fulfilling his kingdom mandate of supporting the needy and touching. Year after year, he spends millions of naira to provide for the needy across the country.
During his birthday celebration several months back, the pastor with a large heart had showered over N23 million on over 100 widows who are members of his church to alleviate their suffering. The man of God had said he was devoted to empowerment and charity to the vulnerable particularly the widows, orphans and the less privileged in the society without minding their religion, tribe or sectional inclination.
Share