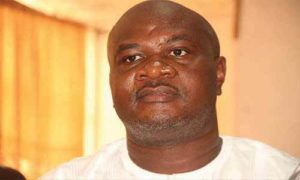 Barring any unforeseen circumstances, all the nine divisional chairmen and secretaries of Kogi East Peoples Democratic Party (PDP) will be smiling home with their cars courtesy of a deal being worked out for them to endorse Senator Attai Aidoko, a senatorial aspirant under the PDP as the sole candidate.

Aidoko, who is currently representing the senatorial district in the red chamber, became desperate after his concerted efforts and pleas at the national secretariat to get an automatic ticket hit the rocks last night.

The election of the party’s senatorial candidate is expected to be by a minimum of 1000 delegates and one wonders what such an induced endorsement, if it falls through, will achieve.

Meanwhile, youths in Kogi East Senatorial District have rejected the re-election of Senator Aidoko as the 2019 general elections approach.

Speaking on behalf of the youths in the zone, Mr. Idris Achimi, condemned the social media propagandists, who he said spin lies and launder the image of Aidoko for political make over for 2019.

“Their propaganda reflects a depressed and despondent, sad, confused, and a lost generation of youths. We don’t know what we want, where we are coming from, and where we are headed.

“The Igala youths of today have failed to differentiate between their political enemies and political saviors. Our propaganda is full of illuminated sadness and intellectual poverty,”.

According to Achimi, Aidoko is the longest-serving federal lawmaker from Kogi East, but ironically, “the worst amongst all, as he has serially failed us in terms of good legislation, provision of amenities through constituency projects and youth empowerment. Aidoko should be told the naked truth. He must be told that the seat of Kogi East doesn’t belong to his family neither any godfather,” they said.

Idris further revealed that Senator Aidoko has spent 12 years both in lower and upper chambers of the National Assembly without anything to show for it, adding that it was under his watch that Ibaji oil wells were ceded to Anambra State.

“As a Senator, he can’t point at one single thing as achievement that we can call his Constituency project.”

“He is only after his personal interest and that of his godfather which is not good for our people in need of development. In fact, Aidoko is a liability on the good people of Kogi East and he has no political relevance in both the region and at the national level,” Achimi stated.

The youths noted that Senator Aidoko hails from Ugbamaka-Igah in Olamaboro Local government and that as the Chairman, Senate Committee on Sustainable Development Goals (SDGs) there is “no project that has come to our land but other senators buy contracts from Senator Aidoko for the interest of their constituencies and he converts the proceeds into buying exotic cars for personal use amid the untold suffering of our people.”

Senator Aidoko, they explained, is not in any way familiar with the saying that ‘charity begins at home,’ while stressing that his people have no water, no electricity, no telephone network, no schools, no single bank neither common ATM in the entire Olamaboro and “of course, no proper health care system yet, we have someone at the senate representing us.

“Aidoko that we know always visit Igala land at night and sneaks out before the crack of dawn.”

“We can’t continue to wallow in this politics of stagnation where some wicked few individuals will gather together to oppose everything that is good for our land.

“Our region has suffered so much neglect despite the facts that we have several opportunities to develop, but we have been suffering so much neglect because of the attitude of some of our leaders.

“The brains of those supporting Senator Aidoko’s 3rd term are notoriously more receptive to short-term rewards.

“People without education are like weapons without bullets because they lack education and political consciousness, they can’t choose and seek their interests.

“They can’t choose their ways and directions of life. They can’t set goals for themselves and strive to achieve them. They can’t propel themselves in the right, proper, and straight direction,”.

The youths stressed that in 2019 ‘by God’s grace,’ Kogi East must decide their future.

“Our people must stop living like strangers and refugees in their own land. 2019 is another opportunity that we must shake off our restrained spirit of compromise and conformity.

“We must refuse and reject immediate gratification of stomach infrastructure that will prolong our suffering and servitude.

“Kogi youths must be ready to liberate themselves from the compassion, complacency, and solidarity with their oppressors.

“In 2019, we must have the right and power to end our decades of suffering by keeping our PVCs intact to vote out Senator Aidoko and all our leaders that have failed us out of office for a fresh leadership,” they said.