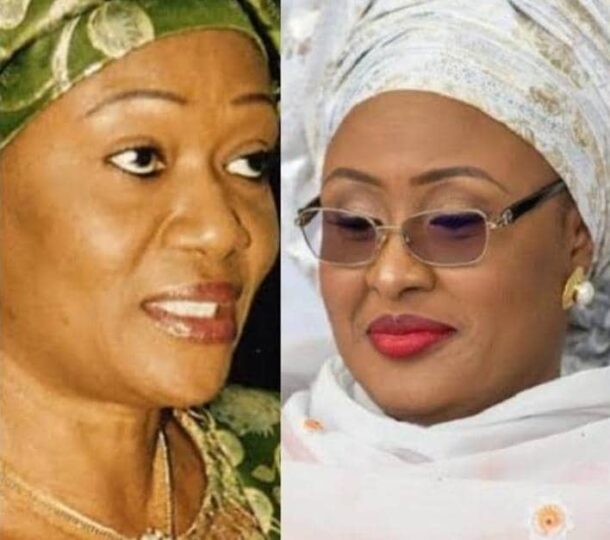 First Lady Aisha Buhari and Sen. Oluremi Tinubu, wife of the presidential candidate of All Progressives Congress(APC) on Sunday held a strategic team with members of the party’s Women and Youths Presidential Campaign Team on how to ensure victory for the party in 2023 election.

The strategic meeting at the State House in Abuja also had in attendance the wife of APC Vice-Presidential Candidate Mrs Nana Shetima, the Director-General of National Centre for Women Development Mrs Asabe Velita-Bashir, wives of APC Governors among others.

Buhari, who is the leader of the party’s women campaign team said the aim of the meeting was to strategise ahead of the start of the party’s campaign.

“APC women have to be united to create a formidable force towards galvanising support to ensure victory of the party at the polls.

“ The APC Tinubu/Shettima Women and Youths Presidential Campaign Team have been constituted to fashion out modalities for the 2023 campaign, I therefore solicit for your cooperation in driving our party to victory.

“Tomorrow, the APC women and youth presidential campaign team will be inaugurated to work with the Presidential Campaign Council to galvanise the support for our dear party.

“ We depend on you to anchor this movement, as Chief Patron of the women and Youths Presidential Campaign Team,” Buhari said.

She therefore charged APC women to be determined and resilient in the task of delivering the party to victory in the forthcoming general election.

“ We can’t afford to lose but work together as a formidable force to achieve success at the 2023 elections, the APC has chosen its candidates for all political seats, it is now time to re-activate our movement.

“The movement of women and youths of Nigeria, as mothers and leaders of our states, your experiences of the last and current dispensation is needed so that we avoid the pitfalls of the past and build a more formidable movement.

“I believe that your presence at this meeting would renew our bond of understanding and reassured ourselves that we can all work together again, in driving our great party to victory come 2023 elections“ she said.

Buhari also informed the gathering of the commitment and support APC women rendered during the 2015 electioneering campaign.

“This formidable force had led the party to victory; the establishment of the APC government since 2015 to date is because of the efforts of those women and youths.

“ The success story recorded in 2015 and 2019 was as a result of our unity of purpose, putting into consideration the synergy of work in harmony for the success by our great party“ she said.

In her remark, the wife of the APC Presidential candidate, Tinubu expressed gratitude to the first lady for her commitment towards supporting the course of women and girls.

Tinubu informed the gathering that they were at the state House to brainstorm and solicit the support of the first lady ahead of the party`s campaign.

“ As you know, the Party`s primary election was keenly contested and I want to use this opportunity to thank all of you who stood with us and gave us all the support on that very long night.

“ At the end of the free, fair and completely transparent process we emerged victorious and now we have before us the difficult task of running a nationwide campaign and securing victory at the polls.

She therefore urged the first lady and the APC women to support lend their voices in the campaign to deliver the APC TINUBU/SHETIMA 2023 during the Presidential election.

“This is a journey that I cannot embark on alone, and I asked that you support me and my sister, Excellency, Nana Shettima, with that very spirit of oneness that has made APC first ladies the envy of everyone else.

“ I stand before you, today to seek your support for my husband in his quest to consolidate on the many achievements recorded by our father President Muhammadu Buhari and deliver on the promises of good governance.

“ It is common knowledge that the in the APC, our first ladies work as one and this cohesion is something that is admired by many, as Governor, my husband stopped at nothing to empower women’’ Tinubu said.

Some of the APC governors wives, who spoke at the event, expressed their determination to mobilise and sensitise the electorates in their various state on the need to vote for Tinubu/Shetima ticket in the 2023 election(NAN)(www.nannews.ng).

@@dailyrecordng
Previous I’m not corrupt, I was only a victim of corruption fighting back – Magu
Next DANGOTE NOT INVOLVED IN KOGI ASSEMBLY FIRE OUTBREAK-MGT