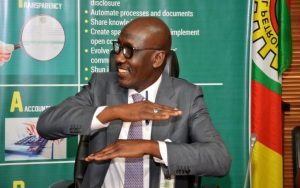 NNPC Group Managing Director, Malam Mele Kyari, spoke when he appeared before the House of Representatives Committee on Public Accounts in Abuja and said the withdrawn funds were the federal government’s share of revenues from oil shared among the federal, state and local governments.

“There is no question of illegal withdrawal. Nobody can withdraw from the account illegally. The CBN governor can be invited to attest to that,” he said firmly.
On queries from the Office of the Auditor-General of the Federation on the alleged unauthorised deduction of over N1.2 trillion in 2014 from proceeds from oil, he said that “the NNPC couldn’t have remitted all its earnings” at the time to the Federation Account.

The committee, headed by Hon. Wole Oke, however, resolved to summon the Minister of Finance, Budget and National Planning, Mrs. Zainab Ahmed; Governor of Central Bank of Nigeria (CBN), Mr. Godwin Emefiele; and the Accountant-General of the Federation, Mr. Ahmed Idris, to clarify the claims by Kyari on the utilisation of the NLNG fund.
Sylva Lists NLNG Train 7, Deregulation as Major Achievements

Meanwhile, the Minister of State for Petroleum Resources, Chief Timipre Sylva, has listed the signing of the Final Investment Decision (FID) on NLNG Train 7, the commencement of the AKK pipeline project and implementation of the deregulation of the downstream sector as some of the ministry’s achievements this year.

A statement by the management of the Nigerian Content Development and Monitoring Board (NCDMB), said the minister reeled out the milestones in Yenagoa, Bayelsa State, during a review meeting with the permanent secretary, directors and chief executives of agencies in the ministry.
He listed some other key achievements as the completion and inauguration of the 17-storey headquarters building of the NCDMB and inauguration of the Waltersmith modular refinery, developed with 30 per cent equity from the NCDMB.

Sylva expressed optimism that more outstanding results would be recorded in the sector in 2021.

In his presentation, the Executive Secretary NCDMB, Mr. Simbi Wabote, said the board had delivered on some initiatives in support of the ministry’s priorities, one of them being the launch of the NOGTECH Hackathon and Science Technology Innovation Challenge (STIC).
He added that this strategy would develop innovation to address pilferage, sabotage and losses of petroleum products in the country.

On the ministry’s goal to build partnerships on flare commercialisation programme and LPG penetration, Wabote said the board was catalysing local manufacturing of 1.2 million composite LPG cylinders per annum in Bayelsa and Lagos States.

“The board is also supporting flare-out projects through Duport midstream company’s 300 million standard cubic feet per day (MMscfd) gas gathering hub in Edo and NEDO 110MMscfd gas processing project in Delta State.
“We are also supporting the establishment of LPG storage/filling plants in five states and as well as LPG distribution depots in six states,” he said.

He explained that the NCDMB had earlier launched the $50m Nigerian Content Research & Development Fund and Oloibiri Museum and Research Centre in support of enhanced oil recovery.

Kyari noted that Nigeria remains one of the most expensive territories in the world for upstream projection, saying that part of the corporation’s mandate this year is to reduce cost.
He said: “We have reduced costs substantially and there are a number of interventions. We have set a target for the industry and our partners to bring down the cost of production to at least $10 to a barrel.”