Adebanjo one of Nigeria’s most consistent, tested icons — Afenifere 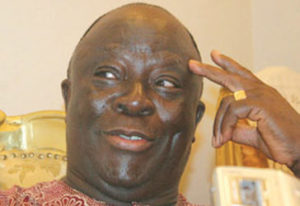 THE pan-Yoruba socio-political organisation, Afenifere, yesterday, described one of its leaders, Chief Ayo Adebanjo, who turns 90 today, as one of Nigeria’s most consistent, forthright, dedicated, trusted and tested icons.

Adebanjo Afenifere described Adebanjo as a priceless gift to Yoruba race and Nigeria and a faithful disciple of Chief Obafemi Awolowo who has remained one of the most strident voices in the calls for a restructuring of the country like the sage himself who had stridently advocated a federal Nigeria since 1947.

In a statement by its National Publicity Secretary, Mr. Yinka Odumakin, Afenifere said: “The entire Afenifere family rises like one man to salute and celebrate one of its most consistent, forthright, dedicated, trusted and tested icons, Chief Ayo Adebanjo as he clocks 90 on Tuesday, April 10, 2018. “The story of Chief Adebanjo is partly that of Afenifere as there is unbroken interconnectedness in a man who has consistently stayed on a political front for almost seven decades.

You can therefore not write the history of Afenifere without Adebanjo featuring or that of Adebanjo without mentioning Afenifere. “In fact, if you take Afenifere out of Chief Adebanjo’s life, all that may be left in his childhood and adolescence.

“This explains our joy as this great spirit celebrates 90 and shatters the whole idea generated by the fear that you have to stay out of trouble with authorities to preserve your life. He has confronted evil in the land for over 60 years, “He remains one of the most strident voices in the calls for a restructuring of Nigeria into a proper federation for the country to fulfill its manifest destiny.

He is an eloquent and consistent advocate of restructuring as a faithful disciple of Chief Obafemi Awolowo who has stridently advocated a federal Nigeria since 1947.” “As he celebrates 90 in a country where life expectancy is 53 years, it is our prayer that God who has spared him for the past 90 years will preserve his life to see a reconstituted Nigeria where all sections will live to the fullest of their happiness and where we will not be counting dead bodies on daily basis. Once again, we salute Chief Adebanjo, a priceless gift to Yoruba Nation and Nigeria.”