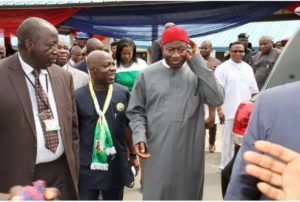 After my recent exposé on how Alex Otti’s mismanagement crippled Diamond Bank, he responded by trying to arm twist the management of the bank into exonerating him.

In his desperation, Otti contacted two Directors and a senior management staff of the bank who in turn approached the Group Managing Director, Mr Uzoma Dozie, to oblige Otti with a press release exonerating him from culpability for the sake of political expediency as he was “contesting for the Governorship position in Abia State and will bring business to the bank when he wins”

After weighing the request, Mr Dozie rejected the request as, according to him, “we have suffered enough in the hands of Otti and shouldn’t be involved further with him and his political ambition”. He however proceeded to direct the Public Relations Unit of the bank to issue a statement denying any plan to sell Diamond Bank to Access Bank in order to avoid panic withdrawals by the customers of the bank, especially considering the bad publicity Otti has brought upon the bank in recent times.

Enraged by the refusal of the bank to issue a statement in his favour, Otti called Uzoma Dozie and threatened to deal with him and Diamond Bank. I gathered that at that point, Uzoma told him to go to hell and do his worst and further vowed to expose Otti if he dares to do anything harmful to the bank and his family.

To make good his threat, Otti contacted his media team and instructed them to release a fake report that his supporters and members of All Progressive Grand Alliance (APGA) are considering closing their accounts with Diamond Bank for refusing to exonerate him of the culpability in the negative fortunes of the bank.

In the report titled “APGA Members to Close Accounts with Diamond Bank in Protest Soon”, which was shared online on Saturday by Otti’s supporters, it stated thus: “APGA members are beginning to makeup their minds on the action to take against Diamond Bank if they refuse to come out boldly and refute the ‘negative story’ peddled around against their former Managing Director, Dr. Alex Otti OFR.”

The report whose content is proof that it was a hatchet job deliberately planted by Otti and his aides further claimed that “while the bank took its time to dispel the rumour of its buy over, the other allegation against its former MD was not refuted.”

“The decision of the bank not to refute the latter allegation seems to be causing disaffection between APGA members and the bank”, the fake report concluded.

Information available to me from sources within the Otti camp indicate that he personally wrote the follow up article titled “How Uzoma Dozie Ruined Diamond Bank” which he deceptively credited to a phantom “Donald Ezenwa”. In that vitriolic article aimed at totally destroying Diamond Bank, Otti extensively deployed half-truths and outright falsehood to attack the person and character of Uzoma Dozie and declared him unfit to hold office as Group Managing Director of Diamond Bank. He also admitted that Diamond Bank is indeed in all sorts of trouble but passed the blame to Uzoma and his father, Chief Paschal Dozie, while tactfully avoiding taking any responsibility for his terrible managerial decisions that he deftly covered from regulators before handing over a bank in dying throes to Uzoma.

In his haste to exonerate himself from blame, Otti ended up contradicting himself on almost all the previous claims he made publicly while running for office of Abia State Governor in 2015 and afterward. For instance, he is now claiming that he did not avail Geometric Power Company the same loan he told members of Aba Chamber of Commerce that he approved to enable manufacturers at Aba have steady power supply.

The same Otti who recently claimed in far away USA that Geometric Power Company is majorly owned by him is now working hard to remove himself from his previous claims. The same way he tried hard to deny that he ever told members of Aba Chamber of Commerce, Industries, Mines and Agriculture (ACCIMA) that he borrowed $100bn from International Finance Corporation (IFC) to develop an industrial park at Aba in 2015 until his opponent obtained and distributed the video tape of the interaction with members of the Chamber.

Those who read through Otti-Donald misleading article would have noticed that for the first time, he admitted that Diamond Bank sacked workers he hired even though he tried fruitlessly to blame Uzoma for “maliciously” sacking them because they are “Alex Otti’s loyalists”. If Otti performed well as he misrepresented in his previous posturings, why were his men sacked by a bank he claimed prospered under his watch?

Now that Otti is ready to speak of his Diamond Bank days of evil, he should remember to share with Nigerians details of the role he played in the failed Rainbow Estate Port Harcourt project that led to a bad loan of a whopping N38b and his exit from First Bank. It is also time for him to come clean on his money laundering deals with former Rivers State Governor, Rotimi Amechi, which led to the siphoning of more than $30m using phantom companies located at same address of 25 Trans Amadi Estate, Port Harcourt.

When will Otti disclose that he has been a regular guest of EFCC since 2014 when he was forced out of Diamond Bank? I expect the Dozies to now make public the details of the charges pending against Otti since he has thrown decorum to the wind and bite the fingers that fed him once more.

Soon Otti will explain how he acquired USA based companies and shares of blue chip companies in that country using multiple proxies. The same “frugal” Otti that once dated my girlfriend and gave her his credit card with hundreds of thousands of dollars to travel to Dubai for shopping should certainly not be the one accusing Uzoma of all kinds of things. The coming days will be exciting indeed because the girl who aborted for him several times is set to engage him publicly.

That Alex Otti is the one accusing Uzoma Dozie of sexual harassment of female workers is the biggest joke of 2018.

Will Otti be ready to defend himself when members of the public sight his private jet and helicopter bills running into billions of naira that I will soon publish?

While not holding brief for Diamond Bank and the Dozies, it should be clear to all those who read Otti’s (aka Donald Ezenwa) article that he is firmly focused on his mission to destroy the Dozie family and their Diamond Bank, having failed in his earlier surreptitious plot to take over the bank using Actis of South Africa.

The truth will soon be revealed on the role Otti played at First Bank Plc where he was also eased out before he teamed up with the South Africans in the plot to destroy Diamond Bank and strip Paschal Dozie of his shares and Chairmanship of MTN Nigeria. While he hitherto failed to achieve the former, he confirmed with glee in his article his success with the latter plot to force Chief Dozie to lose his holdings in MTN Nigeria.

My advice to the people of Abia State is to be weary of Alex Otti and his political shenanigans. There is absolutely nothing he will not do to acquire power and unleash suffering on the people of the state while feathering his personal nest. He has already proved that by changing his place of origin from Arochukwu to Isiala Ngwa in order to contest the 2015 election.

Nobody should take him lightly when he said he was going to contest 2019 election with “red eye” because those of us who know him know that Otti is capable of anything “evil”.

He will use those currently working for him and dump them soon enough. My good friend Ahamdi Nweke will tell you more about Otti, if you don’t know him but choose to fall easily for his deceitful guile.

The choice before Abia voters in 2019 should be between Okezie Ikpeazu and Uche Ogah, both of whom are humble and humane with verifiable records of working successfully with people without betraying them. Flee from Otti or regret later as the Dozie’s are currently doing.

@@dailyrecordng
Previous INEC: Funding Gap Will Not Derail Preparations for 2019 Elections
Next Sekibo emphasizes need for human capacity development amongst staff of banks