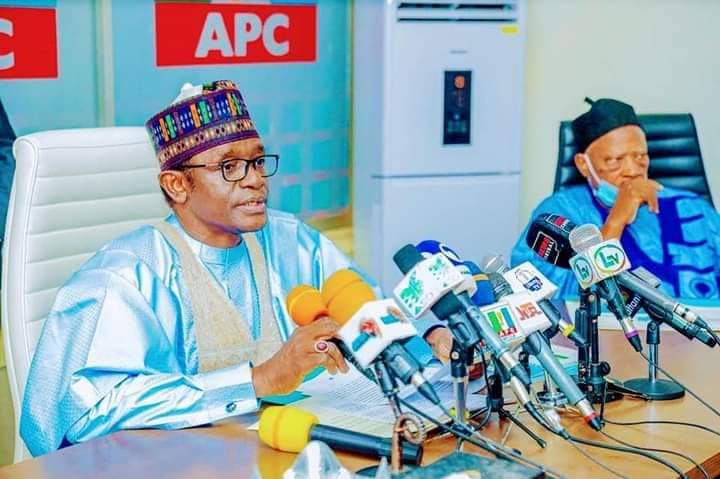 The Caretaker Committee of the All Progressives Congress (APC) has inaugurated a National Reconciliation Committee for the party ahead of its national convention.

Buni explained that the committee was set up to reconcile members who were aggrieved by the outcome of the party’s congresses.

He said members of the committee were carefully selected based on their individual track records of excellence, adding that they had served the party with a high sense of commitment and dedication.

He charged them to critically examine areas of conflict in the party’s just concluded ward and local government congress and advance solutions to problems noticed.

“I want to sincerely commend and appreciate you for the great sacrifices you made to the process of rebuilding the party.

“The much anticipated congresses have commenced and progressed with significant successes.

“We have also constituted mechanisms such as the appeal committees to address complaints arising from the conduct of the congresses.

“Your report on resolution of these discrepancies will indicate our readiness as a united and strong family for the national convention. Your assignment therefore, has great impact and influence on the convention,” he said.

He enjoined members of the committee to remain resolute and dedicated to their assignment with spirit of teamwork.

He urged them to take the interest of the party above personal and selfish interests for APC to remain strong, united as Nigeria’s leading political party.

“The task before this committee is very important and crucial. It is to reconcile, harmonise, integrate and unite members of the party.

“The committee is also expected to resolve real or seeming differences and to cement all cracks for us to approach the National Convention with a united front,”he said.

He added that the committee was expected to conduct appropriate engagement between identified groups in each state where there were disputes.

This, Buni said, should be done to bring about genuine reconciliation and establish lasting peace and unity in the party.

He said the committee was also to consult with party leaders and concerned members as it deemed necessary with a view to achieving peace within the party.

He, however, noted that the APC had progressed significantly with purposeful and productive leadership that promoted justice, equity, fair play and genuine reconciliation to give party members a true sense of belonging.

“I am happy to say that this has restored confidence and trust in the party.

“I am also glad to state that since we came on board, the party’s membership has enthusiastically supported the President Muhammadu Buhari-led administration and of course, the party leadership,” he said.

Buni said it was gratifying that loyal party members had complied with the directive to withdraw multiple court cases instituted against APC.

He added that this had no doubt contributed to the speedy reconciliation and rebirth of the party, saying that the APC was more united, stronger and bigger.

He noted that the South-East zone, hitherto referred to as the stronghold of opposition parties, was gradually melting into the APC as the party increased its fortunes to remain Nigeria’s leading political party.

“It was a crucial tool in the recovery of the party. Over 40 million members were registered while the process is still on-going.

“It provided existing and new members with a sense of belonging and ownership of the party.

“I congratulate all stakeholders, women and youth for the active roles they played towards the success of the exercise,” Buni said.

The committee has former Governor Abdullahi Adamu of Nasarawa State as chairman, while Moses Adeyemo is its secretary.

Some members of the committee included former George Akume of Benue, former Gov. Sullivan Chime of Enugu, former Gov. Ali Saad of Jigawa and former Speaker of the House of Representatives, Yakubu Dogara.