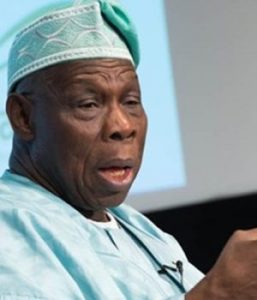 Obasanjo said this on Thursday when he briefed newsmen in Abeokuta, the Ogun State capital

Former President Olusegun Obasanjo on Thursday said the All Progressives Congress is taking Nigerians for fools while “revelling in an unrepentant misgoverning of Nigeria”.
Obasanjo said this on Thursday when he briefed newsmen in Abeokuta, the Ogun State capital.
He said most Nigerians today were poorer than when the APC came into power, adding that the country had been further impoverished with foreign loan jumping from $3.6 billion to over $18 billion.
He said: “The APC, as a political party, is still gloating and revelling in its unrepentant misgovernance of Nigeria and taking Nigerians for fools.
“There is neither remorse nor appreciation of what they are doing wrong.
“It is all arrant arrogance and insult upon injury for Nigerians.
“Whatever the leadership may personally claim, most Nigerians know that they are poorer today than when the APC came in and Nigeria is more impoverished with our foreign loan jumping from $3.6 billion to over $18 billion to be paid by the present and future generations of Nigerians.
“The country is more divided than ever before because the leadership is playing the ethnic and religious game which is very unfortunate.
“And the country is more insecure and unsafe for everybody.
“It is a political party with two classes of membership.”
Obasanjo said the Coalition for Nigeria Movement will collapse into the African Democratic Congress for the purpose of the 2019 elections.
He said: “Let me start by welcoming and commending the emergence of a renewed and reinvigorated African Democratic Congress, as a political party.
“Since the inception of the Coalition for Nigeria Movement, many of the 68 registered political parties have contacted and consulted with the movement on coming together and working together.
“The leadership of the movement, after detailed examination, wide consultation and bearing in mind the orientation, policies and direction of the movement, had agreed to adopt ADC as its platform to work with others for bringing about desirable change in the Nigeria polity and governance.”