Are you noticing this emerging B2B ecommerce trend? 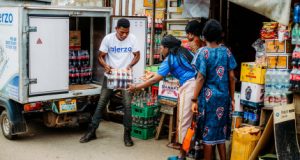 Twitter is now back in business in Nigeria. Having taken a hiatus from conversation on the bird app after the suspension by the federal government, I returned sometime last week. As usual, Twitter Nigeria is a no dull moment space. The African Cup of Nations is on and memes were flying regarding the big name casualties of the tournament. African football powerhouse, Ghana was dumped out of the tournament at the group stage after losing to debutants, Comoros Islands. “What is a Comoros?” “Trouble be like Comoros” were some of the trending hashtags on twitter.

In the midst of the fun and banter, something caught my attention: a retweet popped up on my timeline of a tweet by @ajalayemi. It was something different from the flow of things in space. The author of the tweet is based in Ibadan. His tweet was about branding by Alerzo Limited, a business-to-business e-commerce platform delivering goods with vans and buses. He was fascinated by what he saw and decided to do some little search about the company.

From his findings, Alerzo’s business model was designed to make business seamless for informal retailers. Unlike the Kongas and Jumias that connect sellers to customers, Alerzo is connecting informal retailers to direct supply from manufacturers. An informal retailer is that woman with the small shop on your street who sells almost everything. Yoruba call them “gbogbo lowo”, meaning “I sell all you need”. These sellers are forced to close their shops when going to the market to restock. Some of them lose customers in the process. The stress of frequent market trips also takes a toll on them both mentally and physically. So what Alerzo service implies is that instead of market trips, they simply pick up their phones to restock, or order via Alerzo app and get their stocks delivered at their shops.

The idea sounded novel to me. I’ve not heard or seen such in Nigeria. At that point, I decided to do some digging about the company. Alerzo started off in Ibadan almost two years ago as a brainchild of the son of an informal retailer. In one of his interviews, the Chief Executive Officer of Alerzo Limited, Adewale Opaleye said he witnessed first hand the ordeals of his mother who went through a lot to keep her retail business going while managing the family. He saw the gap that could be bridged by e-commerce technology and decided to make it a reality in Nigeria.

Alerzo is not the only company offering this type of service, there are others like Omnibiz, TradeDepot. Their services are already being enjoyed in other parts of the South West, North West and North Central. Apparently, I’ve been missing a growing trend, just like many of my readers right now. Thousands of retailers are already enjoying the ease and convenience of e-commerce. Improved lifestyle, increase in profit and savings are the immediate benefits that come with the service.

On a broader scale, these platforms with their services will spike huge business activities in the digital space in the next few years. This is due to the fact that informal retail is a multimillion dollar business in Nigeria. Imagine the economic benefits Nigeria will derive from bringing just 50% of those retailers into the digital economy space.

The increasing rate of mobile phone adoption in Nigeria makes this a possibility. In 2021, the number of mobile internet users in Nigeria amounted to over 101.7 million, with over 32% using smartphones. The rate of smartphone usage is increasing and many of these sellers can afford the cheaper versions. As a matter of fact, many informal retailers have tech savvy children who indirectly hijack their phones for games and internet surfing. With the help of these young ones, they can easily make their orders and get them delivered.

For all tech enthusiasts, this is an interesting trend to watch. There are reports of millions of dollars investment by external investors in the B2B e-commerce platforms. This shows the faith and belief that the model can work in the country. From all indications, there are interestings times ahead for informal retailers in Nigeria thanks to a new wave of innovators opening up the market to new possibilities.