Atiku not a saint – Obasanjo [VIDEO] 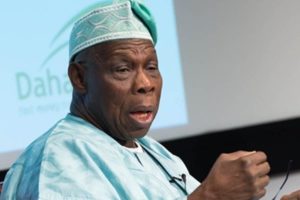 Former president, Olusegun Obasanjo, has said his ex-Vice President, Atiku Abubakar, was not a saint but would make a better leader than incumbent President Muhammadu Buhari.
In an interview with BBC Pidgin, published on Tuesday, the former president further slammed President Buhari, saying he was undeserving of re-election.

Obasanjo had accused Atiku of being corrupt. However, the former president has since gone back on his word and publicly endorsed Atiku’s candidacy.
When asked during the interview why he forgave Atiku, Obasanjo said his former deputy expressed remorse over his past actions and asked for his forgiveness.

Speaking further, he said even though Atiku is not a saint, he would do better as Nigeria’s president than the man who currently steers the nation’s affairs.

He said Buhari’s performance during his first term in office has shown that he cannot be trusted with a second term.
He said, “Atiku is not a messiah, he’s not a saint; and fortunately, he’s not claimed to be. He’s not claimed a fake sanctimoniousness. He came here, acknowledged and showed remorse.

“He acknowledged his past misdeed and showed remorse and all the things I’ve said about him still remains. I said them and nobody has come to controvert them but I am a believer and a Christian as such, and the teaching of God in my own religion is forgive so that you can be forgiven.

“The choice that we have for the immediate Nigerian situation today is between the candidate of APC and PDP.

“From what I know of Buhari and what he has done and shown – his utter incompetence, nepotism and condonation of evil and misconduct, including corruption, the weakness of the body, mind and totality of Buhari compared with Atiku, I believe Atiku will perform two times better than Buhari.”

Obasanjo also poured scorn on the anti-corruption campaign of the Buhari administration, noting that it’s more about propaganda than actual honest work by anti-graft agencies which he said are being used to hunt down political opponents and critics.”

“You can steal the whole of Nigeria, and if you belong to APC, you’re safe; but you can steal N10, if you criticise Buhari and his government, even when you stole that N10 15 years ago, they’ll come and ask for the N10.

“All these institutions that are meant for the running of good governance, of making Nigeria wholesome, are being abused and misused just to perpetuate Buhari in government. That cannot be the way to go,” he said.