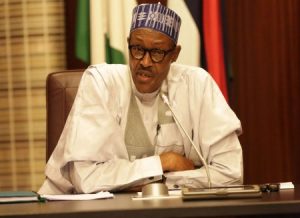 President Muhammadu Buhari on Monday told the National Executive Committee of the All Progressives Congress (APC) that he will be seeking the party nomination to fly the party flag in the 2019 presidential election.

The party NEC also approved waiver for members of the National Working Committee and other leaders across all levels wishing to contest party offices as part of soft landing measure for those willing to contest.

Plateau state governor, Simon Lalong who briefed the media at the end of the party’s shortest NEC meeting ever that the President informed the meeting that in view of the resolution of the tenure elongation issue and the adoption of the report of the Technical Committee, he will be seeking nomination for re-election.

The NEC meeting which started with the arrival of the President at about 11.02 and the introduction of members present ended at about 11.55 am when the President departed the APC national secretariat.
Lalong said the NEC meeting also approved a waiver for members of the leadership from the ward level to the national level to contest in line with the recommendation of the technical committee report.

Lalong who addressed the media alongside the National Publicity Secretary said the recommendation of the technical committee was unanimously adopted by the meeting.

Lalong said “We were given a task to work within a short time. Within that time, we considered those who were for and against. We looked at the issue extensively and did wilder consultations and arrived at a point where we considered not only the legal point, but also the political options available.
“That is why we came to the point that, if we are going to conduct that election within the time available, then the concern shown by other members on the issue of disenfranchisement and allowing others to contest was very genuine. We also considered the opinion of the President and we arrived at the point that it is constitutionally valid to conduct congresses.

“We also decided that if, in conducting the elections, certain conditions are not going to be fulfilled, it means that some people will be disenfranchised. We spoke about the 21 days’ notice and the fulfillment of article 31.

“If we are going to comply with this, the constitution require that certain weavers should be granted to those who are crying that they will be disenfranchised. We came to the conclusion that if these provisions are taken care of, then there was no need for anybody to say there should be no congress.
“Our conclusion is that we must conduct congresses. We looked at the second aspect of the legality of the action and we said that in every constitution and the election of the president of the federal republic of Nigeria, we are not saints, we are not angels.

“It is assumed that in the course of doing things, there may be unforeseen circumstances that will stop you or you reached a brick wall and therefore fail to conclude the exercise. That was the option that was made by the party, in creating an opportunity for there to be an option for you when you get that brickwall. So, we married the two position.
“So, conducting the congresses will also create an opportunity for even those who are not yet members of the party or who have come to the party, but not yet registered because the constitution provide that you must be a registered member of the party and that for you to vote and be noted for, you must be a card carrying member. There was also the issue of reconciliation.

“With this, the constitutional notices are being provided and we will work within this short period. That is why we concluded that everybody be carried al no and everybody’s interest protected in this report. It was a unanimous decision to adopt the recommendations that was made to a point that the President felt so happy and excited and said that because of this reunion and unity in the party, he will now consider and also accept the appeal by several members of the society and the party that he recontest and he accepted to recontest. So, he is going to recontest for the position of the President of the federal republic of Nigeria.”

Article 31 1 (Iii) of the APC constitution states that “Any Party office holder interested in contesting for an elective office (whether party office or office in a general election) shall resign and leave office 30 days prior to the date of nomination or Party primary for the Office he or she is seeking to contest”, while article 31(2) states that “Subject to the approval of the National Executive Committee, the National Working Committee may in special circumstances grant a waiver to a person not otherwise qualified under Article 31(1) of this Constitution if, in its opinion, such a waiver is in the best interest of the Party.”
Also speaking, National Publicity Secretary, Mallam Bolaji Abdullahi said members were leaving the meeting with smiles because it has been a win win situation for all members of the party, adding that those who thought the party will start breaking up after the NEC meeting were disappointed.

Abdullahi said “This is the shortest NEC meeting that we have had. This is because the challenge before us has been clear all along and that what we want is a win win situation for all and that is the work that the committee had done, to find a mid-course that will take care of the interest of everyone.

“In essence, you don’t have to resign before you can contest. That way, the matter has been resolved and as far as APC is concerned, the storm that everyone was expecting to happen did not happen and the collapse that people were expecting to start from this NEC meeting today did not happen.

“So we are leaving the NEC meeting reunited and strong family of progressive politics in Nigeria. We are also happy and you can see that our countenance has changed and we are happy that Mr. President has accepted and has announced his wish to recontest in 2019.”