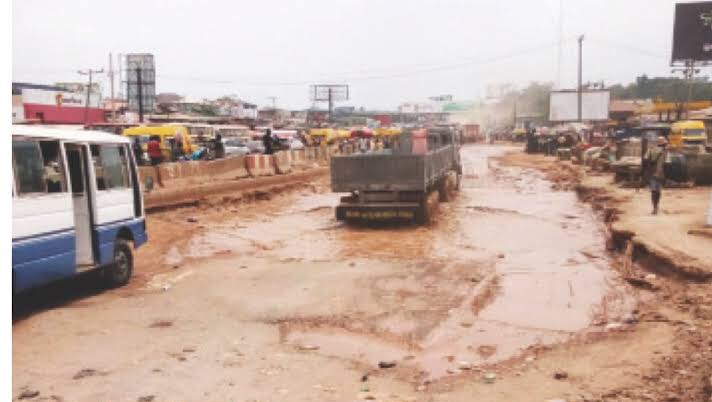 Commercial bus drivers are lamenting over the deplorable state of the Lagos-Abeokuta Expressway, one of the major federal roads in Southwest Nigeria.
The 81-kilometre-long expressway connects the Ogun State capital, Abeokuta, and Ikeja, the capital of Lagos. It is one of the busiest inter-state roads in Nigeria and handles about 250,000 Passenger Car Unit (PCU) daily.

From the General Bus Stop (Abule Egba, Lagos) portion of the road down to Toll-Gate is in bad shape, causing stress for commuters as well as motorists who ply the road.

The heavy vehicular movements on the Sango-Ota inward lane from 6:00 pm and sometimes up to 1:00am, particularly Fridays, is agonizing and usually overwhelms policemen and traffic control officers on duty.

A report by the Federal Road Safety Corps (FRSC) in November 2021 said out of 1,254 persons involved in a total of 140 accidents, about 33 people lost their lives at the Toll-Gate portion of the road.

Muyideen Afolabi, a commercial bus driver, told THE WHISTLER that the bad state of the road is affecting his business as a transporter.

He said that he spends a lot of money to repair his vehicle every now and then, adding that such expenses will not be necessary if all the sections of the road were in good shape.

“Apart from the fact that we experience heavy traffic on the road, it also affect our vehicles. Ordinarily, new tyres are expected to last for like two years, but because of the way the road is, you may end up changing your tyres in a space of one year. And it cost N65,000 to buy one. This is not good for business,” Afolabi lamented.

Another commercial bus driver, Abiodun Kolawole, complained about the portion of the road between Super area and Ilepo.

“I dread that part of the road. So, to avoid traffic on that section of the road, which can take hours sometimes, I usually take inner routes to link Iyana Ipaja,” Kolawole told THE WHISTLER.
“Driving on that road causes a lot of stress, which is not good for our health. Government should please help us by doing something about the other lane, to make our work of transporting people easier.”

“I take Aboniki Balm to ease body pain,” said a driver who did not give his name. The driver who is a bit concerned about his health wished he had another business aside the transportation business.

“It has not been easy for me as a driver that drives on this road everyday. Sometimes I wish I had something else I can do aside this business to feed my family. The stress of driving on this road is much and can lead to breakdown of one’s health,” he said.

To ameliorate the suffering of commuters and motorists, the Ogun State Governor, Dapo Abiodun, in June announced that the state government will be counter-funding the reconstruction of the road with the Federal Government.

“It is most unfortunate that the road has been under contract before this administration, otherwise, we would have reconstructed the road as soon as we assumed office. But, because the road had been awarded to Julius Berger, we had to find ways and means to work with the Federal Government. We are working very hard and very soon, you will see that that road will be reconstructed speedily,” Abiodun said.

“We have finally got the approval for the template that will allow us as government to put some money into that construction as we have agreed to be part of the funding for the construction. We realized that there is a shortfall in the money that the government has approved in the 2022 budget.

“Our administration has, however, agreed to provide for that shortfall to allow for the full completion of the road from Ota to Abeokuta,” he added.

According to Ogun State government, the state part of the road will be completed by this December.  investigation shows that significant portion of the road from ShopRite, close to Toll-Gate to Joju in Sango-Ota has been reconstructed. And will likely be completed this year as work is currently ongoing.

However, there is no sign of anything happening on the Lagos section of the road, which means the daily nightmare of the drivers will continue. This is despite the Federal Government saying in September 2021 that the road will be completed this year.

The contract for the reconstruction of the road was awarded in 2018, but contractors did not commence work until 2020.