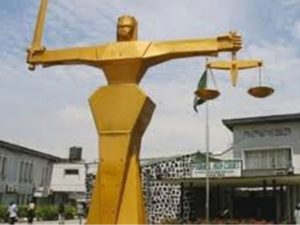 A Rivers State High Court sitting in Port Harcourt wednesday struck out an interim injunction obtained by Ibrahim Umar and 22 others barring the All Progressives Congress (APC) in Rivers State from conducting its wards, local government and state congresses earlier scheduled for September 2019.
The claimants had approached the court, urging it to enforce the ruling the State High Court delivered on October 10, 2018, marked BAC/78/2018, Ibrahim Umar and APC, which stopped the state APC from conducting its congresses.

But the court presided over by Justice G O Ollor, set aside the interim injunction brought before him by the claimants on September 14, 2019, for interpretation and enforcement of stopping the state chapter of the APC from conducting its congresses earlier scheduled for September 17, 18, and 21, 2019.
Justice Ollor held that his court lacked the power to interpret or enforce a judgment of a court with coordinate jurisdiction, hence set aside the interim order, struck out the originating summons brought before him and awarded a cost of N100,000 in favour of the APC.

Speaking to journalists outside the courtroom, counsel for the claimants, Henry Bello, said he was going to appeal the judgment, following his clients’ instruction.

“This is the beauty of the administration of justice; the decision of the court is at variance with what we feel is the position of the law and just as we were stepping down, my clients have instructed me to go on appeal immediately.”
Counsel for the APC, J. C. Williams, on the other hand, hailed the judgment, adding that it clears all hurdles hindering the conduct of the APC’s congresses in the state.

“The court in its wisdom delivered a landmark judgment. Some members of the APC came to court after the party announced timetable for congresses in Rivers State, asking that a court of coordinate jurisdiction should interpret the judgment of a brother court, which he (judge) frowned on, struck out and awarded a cost in favour of the defendants.
“What this judgment means to the APC in the state is that there is no obstacle anymore blocking the conduct of congresses. I want to plead with our brothers in the party to put an end to litigations and collectively build the party in the state,” Williams said.