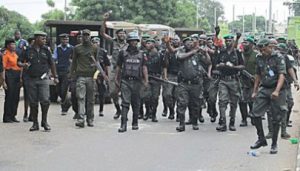 The Enugu State Police Command, has assured the public of a closer and sustained partnership for effective crime control and safety in the state.

The Commissioner of Police, Mr Mohammed Danmallam, gave this assurance on Tuesday while inaugurating the Police Community Relations Committee (PCRC), at the Police Division in Akanu Ibiam International Airport, Enugu.

Danmallam, who was represented by the command’s Police Public Relations Officer (PPRO), SP Ebere Amaraizu, said that members of the public should see the police as theirs and work together with them.

“The command will continue to partner with the public to enable them have a good relationship and bring about improvement on the police-public relations as well as confidence and trust building.

“For effective crime prevention and control, the public should get involved through strong partnership with the police in order to close the existing gap between them.

“This effective synergy will bring about effective crime prevention and control and lead to a secured and safe environment for all,’’ Danmallam said. Responding, the Chairman of the PCRC, Airport Division, Mr Ikechukwu Ekeada, thanked the PPRO for establishing the PCRC platform.

“The PCRC platform will greatly assist us to improve the image and perception of the police by members of the public,’’ Ekeada said. The high points of the occasion were the formal oath taking and group photograph of the executive members, who were drawn from within the airport community and its environs.