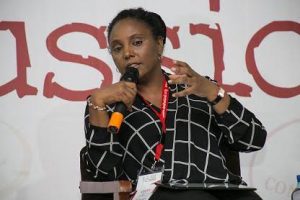 The company, which is promoted by Kadaria Ahmed, former BBC journalist, editor of 234next and host of the Channels TV talk show, Straight Talk and The Core, will be holding a 3-city journalism training for aspiring journalists. The 3 cities are Kano, where she went to school; Uyo, where she served out her National Youth Service and Lagos where she works and calls home.

The training will pay especial attention to the worrisome fake news phenomena and unwholesome PR gimmicks which have dogged the journalism practice in recent times. It will underscore the urgent need to rejuvenate the mass media towards practicing independent, competent, ethical and socially responsible journalism more than ever before especially for those reporting in/on Nigeria. It will also provide participants with a handle on how to build commercially viable and sustainable media outfits as a means of circumventing issues of ethics, professionalism and partisanship.

According to a statement from Daria Media, “The Daria Workshop Series is a training platform for budding journalists; helping them to connect to the reality of journalism practice, clear out illusions and identify their unique niche and place in the continued existence of their field of endeavour. The program will be delivered by trainers from Beyond Broadcasting, Premium Times and Daria Media.”

Facilitators will include former BBC journalist Ben Williams now with Beyond Broadcasting, a company that trains staff at Aljazeera, the BBC and many other media houses around the globe; Dapo Olorunyomi, founder of Premium Times and Kadaria Ahmed.

At the end of the training, 3 lucky female participants will become the recipients of the inaugural Mamman Marshall Scholarship for Women in Journalism. The scholarship is named after Kadaria Ahmed’s father who is described as a forward-thinking man well ahead of his times.

Continuing the statement, Daria Media added that “The Mamman Marshal Scholarship for Women in Journalism is instituted to celebrate a man, who against the grain of his time educated his daughters; giving them an advantage that sets them apart from their peers. This scholarship award, set up by one of his daughters who has risen to become a reference point, a positive image and an example against a backdrop of impossibilities and impediments in the field of Journalism; is to honour her father and his extraordinary legacy.”

To participate in the training and become eligible to earn a full undergraduate scholarship at the three participating schools; Bayero University Kano, Lagos State Univeristy and the University of Uyo, interested students can apply by visiting http://daria.media/training-programs/application-form/.