The governor’s car gifts were delivered to nine members of the House of Representatives while the APC federal lawmaker, Waive was denied his.

Okowa is also the vice-presidential candidate of the Peoples Democratic Party (PDP).

A Government House source disclosed that the governor’s car gifts were delivered to nine members of the House of Representatives while the APC federal lawmaker, Waive was denied his.

“The contract for supply of the cars for the federal lawmakers was awarded to Governor Okowa’s kinsman and member representing Ika federal constituency, Victor Nwakolo, and was paid in full.

“While the other nine members of the House of Representatives from Delta state had their Toyota Land Cruisers delivered to them, Waive of the APC was denied and his is being withheld. Again, we gathered, his is said to be parked at a residence of one of the governor’s associates in Abuja.”

A leaked letter addressed to the state governor, signed by Waive, is titled “Non-Receipt Of My Car”. In the letter dated December 19, 2022, and obtained by SaharaReporters, Waive begged the governor to consider him as one of the beneficiaries of the car gifts.

Waive, Deputy Chairman, House Committee on Power, who cried out for being denied the SUV, accused the governor of not responding to his calls and messages one month after receiving his letter. He lamented that of all 10 members of the House Of Representatives from the state, he is the only one yet to receive his Toyota Land Cruiser (SUV).

Waive’s letter reads in part, “First, let me thank you sir for your magnanimity in upholding the tradition of our dear state in assisting members of the National Assembly with operational vehicles.

“In this 9th Assembly, you have been gracious in providing a Toyota Land Cruiser Jeep to all other members of the house of representatives except myself the honorable member representing the entire people of Ughelli North, Ughelli South, Udu federal constituency in the house.

“Your Excellency, I believe overzealous aides are responsible for my exclusion. I bring this to your kind attention so that you can direct a more senior officer to reach me with mine. I have called your phone number a couple of times and sent a few text messages without any response.

“I understand the huge demand on your time first as our Governor and at this crucial time of electioneering campaigns. I thus decided to write hoping that this letter will come to your attention and you will use your good office to ensure I am not short-changed, oppressed or denied before your very eyes.” 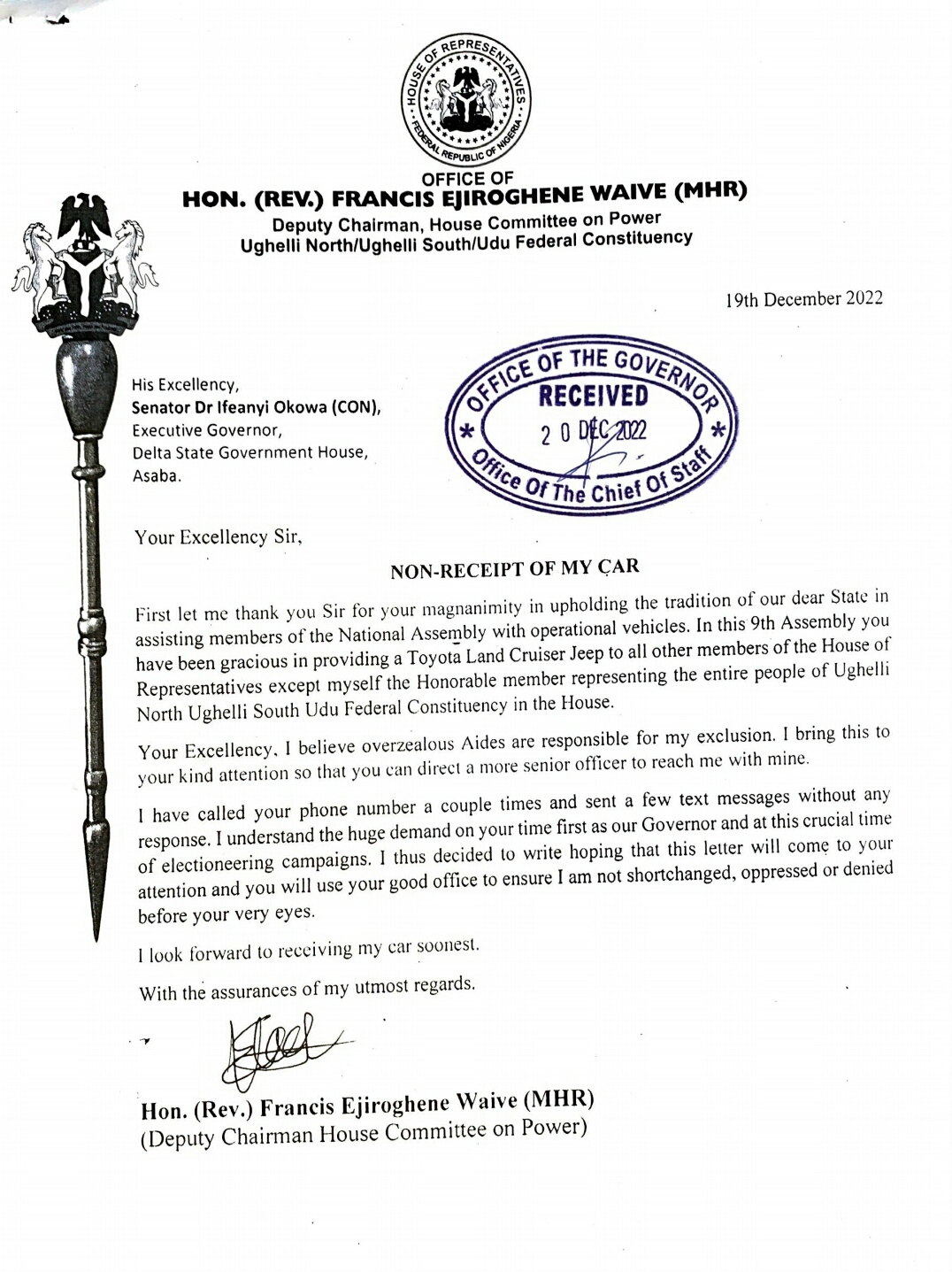 Commenting on the issue, an aide to the state governor who spoke on condition of anonymity, said it has been the practice of the state government not to give operational cars to opposition federal lawmakers.

“If Waive wants that car, he should decamp to the PDP. If he does, he will get more than a car. He cannot be working in Shell and be collecting salaries from Chevron. if he needs a Jeep, let him decamp, simple,” the aide said.

Efforts to reach Waive on his mobile line were not successful as he did not answer calls from SaharaReporters. He also did not reply to a text message sent to him.