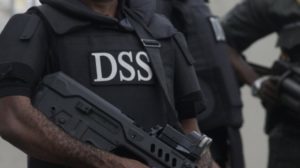 The Department of State Security (DSS) has told politicians in the leading parties in Bayelsa State that they are under its security radar ahead of the November 16 governorship election.

It said it was particularly watching the politicians to know their involvement in any attempt to recruit thugs and move arms into the state to cause violence.

Speaking at a seminar organised by the Nigeria Police for political party chairmen and other stakeholders, the state Director of the DSS, Ishaku Yusuf, said persons under watch were politicians marked for having the capacity to instigate violence during the election.

The stakeholders’ seminar was spearheaded by the Assistant Inspector-General of Police (AIG), Zone 5, D.P. Yakadi.
Yusuf said: “On the issue of identification of those intending to perpetrate crimes during the election, that is being done. Those who have the capacity have been put under security watch and homes under surveillance.”

He lamented that poor attendance of party chairmen and representatives showed their lack of readiness for the poll.

“Another source of worry I have for the coming Bayelsa election is the fact that we have 45 parties listed for the election, but 10 are in attendance here. It shows that security agencies are readier than the owners of the elections,” he said.

In his lecture, Yakadi identified factors that could cause electoral violence and advised stakeholders, including the media, political parties and the Independent National Electoral Commission (INEC) to step up preparations and work against corrupt tendencies before, during and after the election.

He assured the stakeholders of the preparedness of the zone under his watch to ensure a hitch-free poll.

Yakadi said: “Unemployment and poverty are some of the key factors that are responsible for election violence in Nigeria. Another factor is the get-rich syndrome, loss of societal values compared to what was attainable in the olden days. Another factor is proliferation of firearms, easy access and consumption of illicit drugs.

“We are here today to discuss with you how we can have free, fair and credible election on November 16, 2019. The increasing problem of violence in our politics today is a source of security concern.

“The stakeholders meeting organised by the Nigerian Police Force today is centred on the need to create a peaceful atmosphere before, during and after the forthcoming Bayelsa governorship election.

“INEC should ensure that the Bayelsa governorship election meets and satisfies international best practices. They should regularly partner the security agencies, and create a conducive environment for stakeholders to ensure credible election in Bayelsa State. INEC should enlighten and sensitise parties.