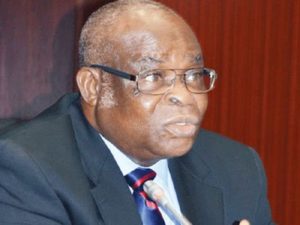 The first national spokesperson for the Coalition of United Political Parties, Imo Ugochinyere, in a statement said the CUPP had uncovered plan by the EFCC to arrest the suspended Chief Justice of Nigeria, Justice Walter Onnoghen on Wednesday (Today).

“The secretariat of the CUPP has uncovered the latest plot by the Presidency to arrest the Chief Justice of Nigeria, Justice Walter Onnoghen tomorrow (Wednesday) being February 6, 2019 and immediately commence their final descent to infamy by forcing him to resign at gunpoint.
“The latest recruit in this plot against the CJN being the Chairman of the EFCC has been given the mandate to execute this plot and has been told there would be no margin for error as the CJN must resign from office or from life one way or the other,” Ugochinyere claimed.

But the acting spokesman for EFCC, Tony Orilade, said he was not aware of plans to arrest Onnoghen.

“I don’t have any information on any plan to arrest him. I am not aware of anything like that,” he said.

In a related development, the CUPP on Tuesday alleged that it had uncovered a plan by the Federal Government to force Onnoghen to resign “at gunpoint.”

It said the decision was taken after Onnoghen turned down “all mouth-watering offers” made to him.

Ugochinyere disclosed this in a statement in Abuja.

Ugochinyere alleged that the government was making efforts to force some senior lawyers to withdraw from defending the CJN.

@@dailyrecordng
Previous Herdsmen stormed my farm, threatened workers’ – CJN Onnoghen writes IGP
Next What Customers will Benefit from the Merger between Diamond Bank and Access Bank.