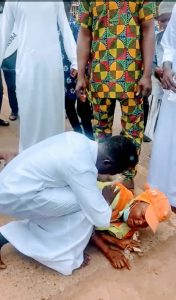 It was an atmosphere of joy and enthusiasm today Friday 19th of August 2022 when the popular world prophet Israel Oladele Ogundipe aka Genesis the shepherd in charge of Genesis Global took to the street of Lagos to showcase his philanthropist, humanitarian services by honouring a woman, known as LAWMA Street Sweeper name (withheld) according to his media aide Oluwaseun Fabiyi, Genesis noticed, this particular woman has been so hardworking in her dealings, saying further, each time he goes to church he always seeing the woman working tirelessly even when others might have gone on recess or might have gone to eat, this LAWMA staff was said to have been so committed and amazing to her work.

The great man of God ‘Genesis’ had severally stopped over to understudied her outstanding activities on the street of Lagos as the exceptional man of God, ‘Genesis’ distinguished himself to honoured the said woman with huge amount of money, also Promised her a wonderful shelter after discovering she has no roof on her head.

Recipients of the honour, according to Genesis Media aide Oluwaseun Fabiyi said the LAWMA staff was rolling on the bear floor in other to show her profound gratitude/ appreciations towards the humanitarian gestures from the man of God. ‘Genesis’ was said to have caught her unaware together with the band men to celebrated her hardworking publicly.

The small but mighty man of God known as Genesis noted that the woman are carefully selected by his assesment and through his disciples on the basis of her outstanding contributions to the environmental sanitation and socio-economic development of Lagos State and humanity, and also her sterling qualities which have endeared her to be a role model

Prophet Genesis posited the exercise, which shall be done periodically to honour more outstanding personalities in our society who have contributed immensely to the socio-economic development of Lagos State.

He however congratulated the woman and urged other to rededicate themselves to the work assigned them to do and see themselves as worthy Ambassadors of Lagos State in their public conduct and character.