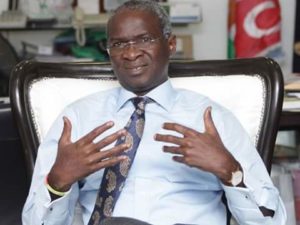 The Minister of Power, Works and Housing, Mr Babatunde Fashola has commissioned a 132/33KV transmission substation with a 40MVA transformer at Mayo Belwa town in Adamawa state.

Fashola also revealed a decision of the federal government to invest N72 billion as a shareholder loan and intervention to the 11 Distribution Companies (DisCos), approved by the Federal Executive Council (FEC).

After the power sector privatisation in 2013, government retained 40 per cent stake in the 11 DisCos while private equity accounted for 60 per cent. The Daily Trust reports that this will be the first intervention loan to the DisCos directly from government shareholder since the privatised operation.

Fashola had in 2017 introduced a N701.9bn Payment Assurance Guarantee (PAG) to the Generation Companies (GenCos) to boost their liquidity and deliver more electricity.

The Central Bank of Nigeria (CBN) has been disbursing a loan of N213bn under its Nigerian Electricity Market Stabilisation Fund (NEMSF) to about 47 power firms including the DisCos since 2015.

The Minister who was represented by the Permanent Secretary (Power), Louis Edozien, charged the 11 DisCos to invest more in their networks to complement TCN grid expansion following the N72bn commitment from government.

Fashola said with the new 40MVA (32MW capacity) Mayo Belwa substation, over seven towns of the state including Mayo Belwa, Numan, Jada and Lamorde will witness improved electricity delivery with the commissioning of the substation adding that the Federal Ministry of Power, Works and Housing complemented the TCN project by installing distribution transformers in the franchise area.

“With this development, TCN has not only improved the quality of power in this area but it has also increased the wheeling capacity of TCN which was lasted simulated in December 2017 to be above 7,000 megawatts (MW),” he said.

He noted that TCN has acquired vast lands to upgrade the new substation to a 330/132/33KV substation and the 132/33KV Jalingo substation to carry more power to the Northeast states.

He said while the procurement has advanced, the 330/132/33KV Yola substation will be upgraded by 350MVA capacity as a 150MVA, and two units of 100MVA transformers will be installed along with other equipment.

To improve power supply in the northeast, Fashola said the administration has resolved hurdles in completing the 40MW Dadin Kowa hydropower plant in Gombe state as the transmission line is being completed while TCN will install Static Var Compensator (SVC) in Gombe to improve the quality of power in the region.