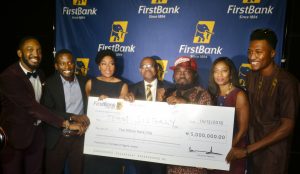 In 2004, Nigerians were introduced to what would later become the new rave and a path to glory and fame for the youth; the first Season of the ‘Gulder Ultimate Search’ was premiered and EzeugoEgwuagu emerged the first winner and instantly launched into a world of fame and glitz.

Thirteen years after and many more talent shows and stars have emerged and graced the red carpet. In line with its age-long heritage of nation building and human empowerment, FirstBankin September 2015 launched FirstStars – a premier filmmaking competitive reality TV show where Nigerian youths were given the opportunity to project their creative skills in directing, producing, art directing, script writing and acting – in partnership with Ebony Life TV, Africa’s first Global Black entertainment and lifestyle network. This journey of filmmaking began with the electrifying process of selecting the most outstanding talents through several auditions which identified the brightest talents for the reality show.

The contestants were taken through the rigorousjourney of filmmaking under the tutelage and mentorship of a panel of judges comprising of award winning director Walt Banger, producer – Tolu Ajayi, writer – Tosin Otudeko, art director – Theo Lawson and A-list Nigerian Artistes – Iretiola Doyle and Deyemi Okanlawon, among others. Through a series of exciting creative challenges as well as a string of tense and teary eliminations, two teams emerged to compete for the final prize of N5million. With the requisite mentorship and in line with the mandate of the reality TV show, the teams have produced two movies‘Sisterly’ and‘ItTakes Five’.

The finalists’ movieswere premiered on December 14, 2016 at the Film House, LekkiPhase oneand hosted by FirstBank and EbonyLife TV. It was a  keenly contested exercise as both teams put up their best, showcasing their talents in directing, producing, art directing, script writing and acting to produce novel movies with insightful themes, suspense-filled plots rising to intense climaxes and strong resolutions. At the end of the two movies’ premiere,Team Sisterly was voted winner with 30 votes, beating Team It Takes Five which garnered 23 votes. A cheque of N5 million was presented to Team Sisterlyby the Sponsor, First Bank of Nigeria Limited, represented by the Deputy Managing Director of the Bank, Gbenga Shobo.

FirstBank is passionate about the arts and the creative economy as a major step in economic diversification. The Bank’s partnership with EbonyLife TV to produce FirstStars comes under the auspices of the First@arts initiative.

According to Gbenga Shobo, Deputy Managing Director of FirstBank, the Bank is committed to promotinghome-grown human capacity development across several art platforms and through this strategic initiative, FirstBank will continue to take purposeful steps towards economic diversification and the support for rising talents in the creative industry. Mo Abudu, Executive Chairman and CEO of EbonyLife TV commended FirstBank, noting that the Bank is the first to support the creative sector across all categories as depicted through FirstStars.