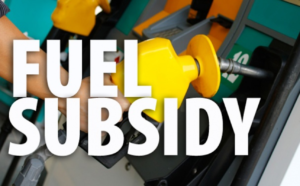 Despite pressures from the International Monetary Fund (IMF) and the World Bank that Nigeria should end its fuel subsidy regime, the federal government has said there is no immediate plan to remove the petroleum lifeline.

This is coming as the Petroleum Products Pricing Regulatory Agency (PPPRA) yesterday disclosed that Nigeria’s daily petrol consumption has increased by two million litres, from 54 million litres in 2018 to 56 million litres in 2019.
The Minister of State for Petroleum, Dr. Ibe Kachikwu, has also assured that the country has sufficient petrol supply.

The Minister of Finance, Mrs. Zainab Ahmed, while addressing journalists yesterday during a ministerial press briefing at the end of the World Bank/IMF Spring Meeting 2019 in Washington DC, said the subsidy would remain because the federal government was yet to have an alternative to cushion the effects of the removal.

According to her, “On the subsidy, there is no imminent plan to remove fuel subsidy. We are here to discuss with the global community on various policy issues. One of the issues that always come up in the reports, especially IMF Article IV Report is how we handle subsidies. So, in principle IMF will say fuel subsidy is better removed so that you use the resources for other important sectors, and in principle that is a fact but in Nigeria, we don’t have any plan to remove subsidy at the time.”
She said: “This is because we have not yet designed buffers that will enable us remove the subsidy and provide cushions for our people.

“So, there is no plan to remove subsidy. We will be working with various groups to find what will be if we have to find what the alternative is. We will discuss this at the EMT. We have not yet found viable alternative, so, we are not yet at the point of removing subsidy.”

On Eurobond, Ahmed stated: “The issuance is going to be the second one this year and the bond is going to be utilised for some agricultural projects, for some power projects; mostly solar projects as well as projects in the water sector.
“The essence is that the project must be green. They must be projects that are not contributing to emissions in the society. The green bond is a successful one. All the projects that were scheduled to be financed by the green bond have been so financed and the projects are at various levels of completion.”

The Governor of the Central Bank of Nigeria (CBN), Mr. Godwin Emefiele, reiterated that the federal government’s policies are capable of ending poverty and spurring industrialisation.

He said: “After leaving the spring meeting last year, we had projected that growth in the economy will be at about 3.9 per cent for 2018/2019; however at this year’s meeting members were disappointed that much had changed basically for a couple of reasons. One, escalation of trade tensions between China and US, there were some macro-economic stress points in some countries like Argentina and Turkey. There were disruptions in the auto sector in some parts of Europe like Germany; there were also tight credit points in China and macro policy normalisation.

“These factors contributed to the weakening in the global growth figures especially during the second quarter of 2018 and during the first half of 2019 as the weakening numbers are expected to continue.

“Based on these factors growth at this years spring meeting was revised downward to 3.3 per cent. Although the 3.3 per cent is considered reasonable, the outlook for most countries is still challenging with uncertainties in the short term.

“For Nigeria and other sub-sahara Africa where we come from, some if the factors earlier highlighted contributed to the growth figures for the region from three per cent in 2018 though it is expected to pick up to 3.5 per cent in 2019 / 2020.

“The recovery in the global growth is expected during the second half of 2019 and hoping that the engagement between the US and China will lead to de-escalation of trade tensions.”

The governor noted that the 2019 Spring Meeting acknowledged that there would be need for the World Trade Organisations (WTO) to begin a process of reform that would lead to an update of the role of the game and aimed at protecting even the weaker economies.
Speaking about the Economic Recovery and Growth Plan (ERGP), Emefiele stated that the “Central Bank, being the monetary monitoring authority in Nigeria, was also part of the process of developing the ERG document,” adding that “document, I repeat, is applauded in all parts of the world as a standard plan that will lead to the development and the industrialisation of Nigeria. It is followed through like a Bible.

“Naturally, as you know about the plan, you find that sometimes you over shoot the target or sometimes, for one reason or the other you are not able to meet those targets. But by and large, looking at the document that specifies the need for us to achieve micro-economic stability, I can say that we have achieved a relatively stable micro-economic environment in Nigeria with inflation stabilising at about 11 percent, with exchange rate looking good, with reserve build up and all that.”

He said those are the mandates in the ERG, emphasising that the slow growth rate is not affecting Nigeria in isolation, assuring Nigerians that efforts are on to accelerate growth.

On the possible impact of Brexit, either with or without deal, Emefiele noted that Brexit, being an immigration and trade, portends no danger to Nigeria.

“If you look at that, in my view, there is not going to be any adverse effect on Nigeria but we are reviewing it to see that the implications, which I would expect to be naturally positive.”

The Minister of Budget and National Planning, Senator Udoma Udo Udoma, who noted that Nigeria is set for greater growth with the re-election of President Muhammadu Buhari, said the slow pace of growth in Nigeria is due to the downward trend in the economy.

“When you are moving backwards it takes a lot of efforts to stop the decline and reverse it and when it is reversed, at the beginning, it moves slowly. It takes time for momentum to build up and that is why the growth is still a little slow,” Udoma said

The agency has also explained in a statement signed by its Executive Secretary, Abdulkadir Saidu that the country’s petrol consumption figures have been on the increase since 2017 when it was 46 million litres.

It added that between 2017 and 2019, the country’s daily petrol consumption rose by 10 million litres.

The report added that most of the petrol volumes Nigeria spent money subsidising in 2018 were inflated as daily consumption rose to 54 million litres per day (ml/d) from 40ml/d in 2017, ostensibly due partly to out-smuggling.

But in the PPPRA statement, the agency equally stated that it has observed a sudden re-appearance of queues at some filling stations over speculation of shortfall in the supply of petrol, and advised against such.

The statement said: “PPPRA in line with its mandate to regulate petroleum products supply and distribution as well as establish an industry data bank has continued to monitor products supply in the sector in line with best practices. Thus, PMS average daily supply for the year 2017, 2018 and 2019 are about 46 million, 54 million and 56 million litres respectively. These indicate an improved level of supply in 2019.”

It added with regards to the queues for petrol that: “Based on the available data, there is adequate supply of PMS with over 21 days sufficiency. PPPRA therefore urges fuel consumers across the country to desist from panic buying as the agency would continue to monitor the supply situation and take every step required to ensure that there is no disruption in the supply chain.”

PPPRA thus assured Nigerians to disregard the panic buying, saying the country had some adequacy in product supply to meet the demands of consumers.

In a related development, Kachikwu has assured that the country has sufficient petrol supply.

The minister told the News Agency of Nigeria (NAN) yesterday that the country had gone past the era of fuel scarcity and urged motorists to desist from panic buying.

“ NNPC informed me when I made inquires that they imported enough.

“Yesterday, I saw a few pockets of scarcity in Abuja, but I was told that it was Petroleum Equalisation Fund (PEF) related distribution issues, and it will be sorted out as soon as possible.

“So, it is not an issue of lack of sufficiency, I am told they have about 28 day’s sufficiency, two weeks ago, they presently have between 14 and 15 days product sufficiency,’’ he said.

The minister noted that the 28 days sufficiency was okay based on 50 million litres daily utilisation in the country.

“I don’t expect to see a scarcity, I just expect them to work hard over the next few days to deal with whatever logistic issue they have. I will be working with NNPC on that,’’ he added

On queues building up in some filling stations in Lagos and Abuja, he maintained that the country was wet enough to serve the needs of motorists.

“I haven’t visited Lagos cities, but the information I have is that there is enough product on ground and we should be able to deal with whatever it is.

“The problem with fuel scarcity is that if you allow it to last for three days , then it builds up a life of its own.

“That is what I have enforced NNPC to do to make sure that it is resolved,’’ he said.

Kachikwu noted that it would had been a major issue for the country if there was insufficient product on ground but assured that NNPC would be able to resolve whatever the situation was in a few days.