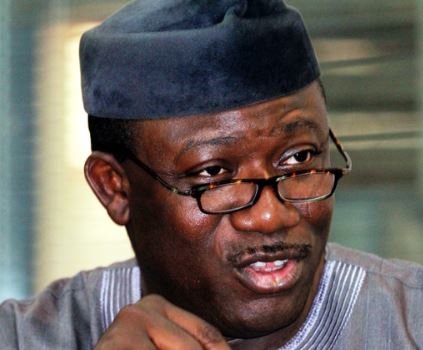 According to him, they do not see the national minimum wage increase as a general wage review.

Fayemi, who spoke with our correspondent on the phone, said: “We are not divided. We have agreed to the national minimum wage and we are paying. Even if we do not agree, the National Minimum Wage is already a law which is binding.

“Our proposal during the negotiation was N24, 500 minimum wage but at the end of the negotiation, N30, 000 was the agreed figure and we abide by that because it is now a law.

“However, governors are very clear that a national minimum wage increase is not tantamount to a general wage review.

“Whilst we know that there may be a need for a minimal consequential adjustment, we (governors) are together with the Federal Government that this should not exceed nine per cent.

“We think nine per cent is too much for those who are already earning above the minimum wage.

“It is a minimum wage increase; it is not a national wage review in the sense that it affects those who are earning below N30, 000.”

Another governor from Northcentral, who spoke in confidence, said: “Some states have not paid the N30, 000 minimum wage because there is no general agreement yet on the consequential increase. Negotiation is still on and the NGF is fully represented.

“The government has offered nine per cent consequential increase across the board for those who are earning above the minimum wage threshold but the Nigeria Labour Congress is asking for a 45 per cent increase.

“The Federal Government has said 45 per cent consequential increase is unrealistic. The government has already made provision for the N30, 000 minimum wage in 2020 Budget. Where do they expect the government to get the funds?

“Some consequential increase may be sensible but this demand for 45 per cent is unrealistic.”