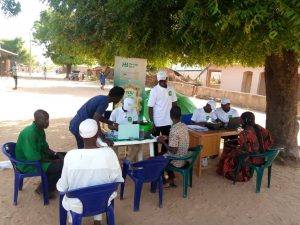 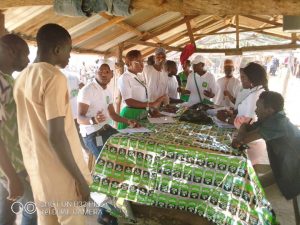 As part of efforts to consummate the Central Bank of Nigeria (CBN) initiated policy aimed at reducing the figure of the unbanked populace by 20 percent by 2020 and to ensure greater participation in the nation’s financial sector, Heritage Bank Plc has keyed into this initiative to drive financial inclusion and promote economic growth.

CBN has mandated all banks in line with the 2020 financial inclusion target, to have a nationwide Account Opening Week.

The Account Opening Week is an initiative of the CBN, Bankers’ Committee and other Stakeholders to provide opportunities for financially excluded Nigerians and Micro Small and Medium Enterprises to open accounts with formal financial institutions, with the overall aim to access financial services to reduce the current 36.8per cent financially excluded to 20per cent and stimulate economic growth.

Towards this developments, Heritage Bank strategically deployed its technology and large number of staff to reach the large populace who do not have bank accounts in selected states were sensitised and mobilised to designated centres in rural areas, where they opened their personal accounts.

Speaking on this exercise, the MD/CEO of the bank, Ifie Sekibo stated that Heritage Bank has been at the fore front and continued to give its unreserved backing towards reducing the exclusion rate to 20per cent by 2020, create jobs, reduce poverty and improve the welfare of the people.

According to him, the bank succeeded in opening more than 2, 000 bank accounts in designated centres of the following six (6) states; Kano, Ebonyi, Nasarawa, Gombe, Bayelsa and Ondo.

Meanwhile, Sekibo made recourse to Heritage Bank’s supports so far, thereby noting that the bank have been taking aggressive approach with the introduction of agent banking partners.

He pinpointed that the bank has brought on board over 10,000 agent partners since the commencement and launching of ‘corner shop’, which lends credibility to the consistency of the service and how it is changing lives and empowering Nigerians across the country.

At this steady growth rate of approximately 17.5 percent new agent per month, one can say that hitting the long term vision of 100,000 active agents in five years is well within reach.

However, Sekibo explained that financially excluded persons constitute a gap in the financial system and there is no way to create a perfect economy except all these people are brought on board.

“Another issue is that the older generation seem to be averse to technology because they have not been exposed to it and the fear of fraud,” he also said, but assured that the CBN and the banks will continue to improve its technology space.

@@dailyrecordng
Previous BREAKING: Atiku’s son tests positive for Coronavirus
Next Nigerian Businesses Need To Position Themselves For Greater Challenges Ahead