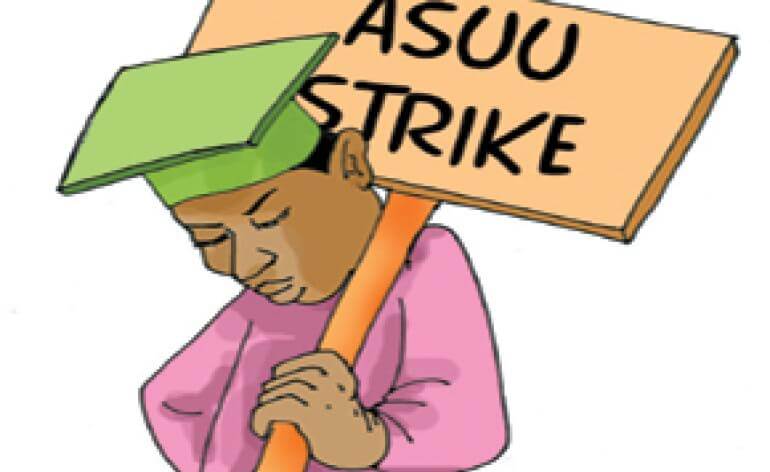 The Academic Staff Union of Universities on Sunday said the signing and implementation of a renegotiated 2009 Agreement will end the over five month old strike.

The union maintained that her members had sacrificed so much with their own welfare, lamenting that the Federal Government owed their members over nine years allowances.

The Chairman, ASUU University of Ibadan Prof. Ayo Akinwole, who said this in Ibadan added that Nigerians should not see the strike as an ASUU thing but a fight all Nigerians must own to have a future of quality education for their children.

According to Akinwole, Nigeria is in the hands of incompetent people due to collective negligence of Nigerians.

He said, “Until we rise above sentiments to get responsible and responsive people who will be accountable to Nigerians into public offices the cycles of strikes will not end in Nigeria.

“The Federal Government led by President Muhammadu Buhari is largely uncoordinated, the President gives order and his media aide denied he gave such order.

“Although the Federal Government has stopped the salaries of our members for five months, lecturers are resolved to fight to victory over the parasitic ruling class.

” Nigerians should join the struggle to get money from government to revitalise public funded universities to give children of Nigerian masses hope of governing their country. Unless that is done, the children of the rulling class trained in foreign universities will return to take over from their wicked parents and continue to enslave Nigerians.

“The union will actively participate in the two days protest being organised by NLC and other labour unions in the country. It is sad that President Buhari government which prides itself as fighting corruption will be frustrating the use of homegrown solution for IPPIS that has been discredited by audit report of 2019.”

The ASUU leader stated that members of the Union are also affected by the strike not only in terms of finances but their education as many of them are doing their doctoral degrees in public universities, adding that many will also be affected as their promotion will be delayed and “my own children are at home with me too.

“We got here by collective negligence of electing incompetent people into public offices. The fight for quality education for the children of the masses has become a class war among the economic elite, the working class and the ruling class, until we rise up and demand accountability from those in office to do what is in the best interest of the majority, cycle of strikes and underdevelopment will not stop.

“Nigerians continue to elect people who don’t care about them. We worship those who have money than those with right virtues and have interest of the society at heart. Our renegotiation ought to have ended by 2012 but here we are in 2022 and yet the government is playing games with us. We are asking for a renegotiation of existing agreements that will position our members as human beings working in a decent place.

“We are asking for revitalization of public universities through appropriate funding. We are saying we have a better homegrown alternative of University Transparency Accountability Solution, we are saying check proliferation of universities that you cannot fund and we are saying Nigerians deserve to be ranked among top 100 in the world if our leaders invest in education.

” We should be developing our own solutions not depending on others. Sadly we have uncoordinated Presidency and cabinet working at cross purposes. This strike is not about ASUU, It is about the future of the Nigerian children.”