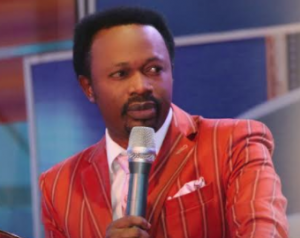 With his special gift of prophecy, the servant of God has been able to chart his course in perpetual victory and triumph as well as prophesying the ways of many out of troubles.

So far, Bro. Iginla, as he is popularly known and called had foretold a number of events majority of which has come to pass.

Of note was his prophetic bombshells released about the recent leadership crisis in Zimbabwe.

The televangelist and philanthropist whose prophetic prowess, word impact, stunning deliverance ministration, diverse healings are second to none had predicted the crisis first during the church cross over service this year, again on the 14th of May and 2nd of July, 2017 during his church services.

Analysts say it appears to be the climax of a power struggle between liberation-era figures loyal to the country’s ousted vice president, Emmerson Mnangagwa and forces faithful to First Lady, Grace Mugabe, wife of Robert Mugabe who is seen as vying to succeed her 93-year-old husband. The events on Tuesday 21st November, 2017 led to Robert Mugabe’s resignation as the president of Zimbabwe, ending his 37-year reign.
Bro. Iginla however, noted that he is not particular about the removal of Mugabe but that the right person should take charge.

He further commended the military for not staging a coup but simply intervening according to the message God gave to him concerning the crisis.

Interestingly, Bro. Iginla’s emergence has a leading prophetic voice in the world today was not over night.

One of his shocking predictions which shook Africa was in December 31, 2014 when during a live service said the unpopular party in Zambia’s forthcoming election, Patriotic Front whose candidate is Lungu would emerge winner.

The prophecy generated a heated controversy with many waiting to prove that the man of God was a liar. Undaunted, he said he can’t change it since it was God’s voice. And he was proved right. Lungu is now the President of Zambia. He also predicted the attack on his (Lungu’s) health which came to pass according to his word.

Also, Iginla was the first prophet to have warned Nigerians about the invasion of the deadly disease, Ebola.