I am not corrupt, Buhari tells Nigerians 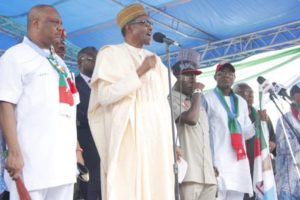 President Muhammadu Buhari on Wednesday stated that he was never convicted of corruption in all the positions he held in the country.

He promised Nigerians that he will continue to uphold the trust they have in him if re-elected for a second term in office.

He made the declaration at the Park Oruta Ngele Township stadium Abakaliki, the Ebonyi State capital, during the All Progressives Congress (APC), presidential campaign.

He said: “I can assure you that I, as the president, today have never been in a position of abusing trust. As a governor of the whole six north eastern states, as minister of petroleum for over three years and as a former head of state. I was arrested, detained, investigated but they never found anything against me.”

The President thanked Ebonyi people for turning out in their large numbers for the rally, saying that they demonstrated that they cannot be bought; he urged them to hold him by his words.

He said: “The important thing is that, please try and hold us by our promise. When we came here the last time, we told you there are three fundamental things the country is facing. First we had to secure the country because part of the country was under threat in the North East, at least 17 local governments were in the hands of Boko Haram; second was the economy. The able-bodied unemployed persons in Nigeria are too many. The thirdly was to fight corruption.”

The president congratulated the military and other law- enforcement agencies that today none of the local governments in the North East is under the control of Boko Haram.

“They have resulted in indoctrinating young men and abducting young girls below the ages of 15, wrap them with explosives and send them to soft targets – churches, mosques, market places and motor parks. Even that is becoming rear now.”

Buhari also said that with a favorable weather, Nigeria had achieved food security and no longer imports rice, adding that the money saved from importation was now being used for infrastructural development.

He added that the money is now being channeled to building roads, rails among other infrastructural development.
According to him, “we thank God that Nigeria prayed very hard and the three previous rainy seasons were good. The government realised it and asked the Central Bank and the Ministry of Agriculture to give soft loans and make fertiliser available to farmers at half the price it used to be. And every able-bodied person who does not feel too big to earn a living went back to the farm and nobody regretted it. We have now virtually achieved food security; we no longer import rice as we used to and the money we have saved are for infrastructure. We are doing the roads, the rails and we are doing the new standard gauge and we are improving on power.”

He added that “the last thing is about fighting corruption and bribery. Fighting corruption is a very difficult process, but we are doing our best by trying to reorganise the Nigeria police and the judiciary itself. Because, we appointed people that went into public office without their own houses, without even maybe good cars, but within three years they build houses in Abuja, opened accounts in Europe or America and we cannot touch them. But when we discover what they have, we take them to court and when we take them to the court, we hope they will be prosecuted and then we will punish them.

“I can assure you that I, as the president today, have never been in a position of abusing trust. As a governor of the whole six north eastern states, as Minister of Petroleum for over three years and as a former head of state. I was arrested, detained, investigated but they never found anything against me. So I went through all the rigmarole that is against our development as a nation. God has given us people; he has given us resources.

President Buhari, therefore, urged the people to vote for him to continue with the good work his administration had started.

According to him, “what this administration is doing and what it will continue to do, if you vote me is to make sure we realise the potential of our people and the resources God has given us to make life better for this country, for our future generations.”

Also speaking, the National Chairman of the APC, Adams Oshiomhole, who received 25 leaders from other parties, who have resolved to work for the APC, accused the presidential candidate of the People’s Democratic Party (PDP), Atiku Abubakar of working for foreign interest.

According to him, Atiku who wrote letters to United Kingdom (UK), Unites States (US) and European Union (EU), was appealing to western sentiments angling to take over Nigeria’s economy.

“The right to defend Nigeria’s sovereignty is not negotiable,” the APC party chairman said.

Oshiomhole maintained that Atiku referring to western interest would only injure Nigerian economy and pauperised the people, calling on the voters never to vote for him.

He described the forthcoming election as a class war between the elite and the poor, just as he insisted that Buhari’s policies including TraderMoni were pro-poor despite the complains of the likes of former President, Olusegun Obasanjo.

He asserted that no external force can impose leaders on Nigeria. ENDS