I Have No Plan to Defect to APC, Says Orji 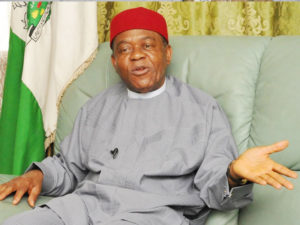 The Senator representing Abia Central at the National Assembly, Theodore Orji, has said he has no plan of defecting to All Progressives Congress (APC).

A statement made available by his media adviser and legislative aide, Eddie Onuzuruike, said there was no reason for Senator Orji to leave the Peoples Democratic Party (PDP).

“In fact, there is no reason for that. The PDP, our great party, gave him the platform for the governorship and the Senate. The same platform is ready for a second tenure. When the PDP was engulfed in crises he was strongly with the party and was instrumental in resolving the crises so why should he leave a peaceful house to Abia APC populated by his detractors?” He asked.
The statement further said: “Senator Orji is an ardent believer in discipline and loyalty. Jumping from one party to another is not in his character. In truth, such actions do not convey seriousness and steadfastness, factors that he considers as sound attributes.

“He has emphatically debunked this news and clearly stated that there are no reasons whatsoever to jump ship or dump his beloved PDP.”