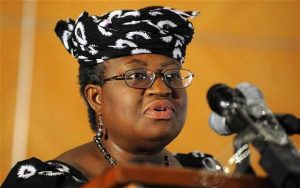 Ngozi Okonjo-Iweala, the new director-general of the World Trade Organization (WTO), says she was surprised to learn that the US administration led by Donald Trump blocked her selection as WTO DG.

Speaking at her first press briefing as the incoming WTO DG, Okonjo-Iweala said she had two interviews with the Trump admin and there was no indication of opposition.

“I think I was quite surprised when that came at the decision-making meeting because there had been no indication previously that there was any problem with the US,” Okonjo-Iweala said.

“I had had two very good interviews with the authorities in the administration. So it was a surprise. But you know, that is the way life works and when things happen, you take them in your strides and move on.”

Okonjo-Iweala had garnered the support of 162 countries out of the total 164 states that make up the WTO. But at the decision-making meeting, the US said the WTO is in dire need of reform and must be “led by someone with real, hands-on experience in the field”.

The world power put its weight behind South Korea’s Yoo Mhung-Hee, whom it referred to as a bona fide trade expert.

“Minister Yoo is a bona fide trade expert who has distinguished herself during a 25-year career as a successful trade negotiator and trade policymaker. She has all the skills necessary to be an effective leader of the organization,” the US trade representative had said.

The former minister of finance in Nigeria eventually got the nod from the Joe Biden and Kamala Harris administration.

“It was absolutely wonderful when the Biden-Harris administration came in and broke that logjam, joined the consensus, and gave me such a strong endorsement,” she added.

Okonjo-Iweala who would become the first female and first African to lead the WTO said she feels a burden not to disappoint Africans and women across the world.