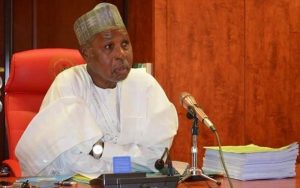 The Katsina State Government has revealed that it spent the sum of N66.735 billion on road construction and rehabilitation since the inception of Governor Aminu Bello Masari’s administration over six years ago.

The Commissioner for Works, Transport and Housing, Tasiu Dahiru Dandagoro, who disclosed this in his office in Katsina in a chat with The Nation on Masari’s achievement in the road, transport and housing sectors, said several milestones have been recorded despite inherent challenges, including funding.

He said: “The Aminu Bello Masari’s administration inherited so many roads construction projects amounting to N7.1 billion from the previous administration, which further threatened the deployment of scarce resources in the sector.

“There are also 19 new road projects amounting to 470km  valued at N43.34 billion embarked upon by this administration of which 12 have been completed, five of which was inaugurated by President Buhari when he visited the state.”

He reeled off some of the reconstructed road projects to include Tamawa-Bindawa–Charanchi Roads, Fago-Rigiya Saminya Roads, among others.