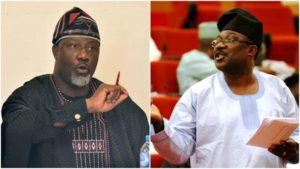 Senator Smart Adeyemi of All Progressive Congress, APC has urged his party members not to over relax, but give their all to win the Kogi West supplementary election slated for November 30.

Adeyemi is already leading his PDP opponent, Dino Melaye with over 20, O00 votes in the last Saturday rerun election for the senatorial axis.

The senator spoke on Friday in Lokoja on the sideline of INEC decision to conclude the rerun exercise on November 30. The senator said despite having a comfortable lead, the party must not give in to overconfidence, but rather doubles its efforts to get the remaining votes.

He said, “We as party members must mobilize and fight like never before for the remaining votes. We must commence House to House move, and telephone contacts of the 30,000 PVC holders.

“We must not look at the supplementary election with a view that our opponent is politically paralyzed by now; rather, we must work towards capturing at least 90 per cent of the vote.

“Our aim is to get 30000 out of the 31000 PVC holders of the 40000 registered voters in the affected areas; whether our opponents are ready or not is secondary.”

Senator Adeyemi, however, eulogized his party members for their supports and solidarity, especially in the last Saturday outing, calling on them to finish the race with a wider margin.

“I sincerely thank you for your support and solidarity in the last Saturday outing, my full address will be after the rerun election is concluded. “But for now, let us resume with more vigour and determination our efforts towards the November 30 supplementary election. Let us go from house to house to mobilize people out for the exercise. We must give the election our all.”

The supplementary election is to be conducted on November 30 in 53 polling units.