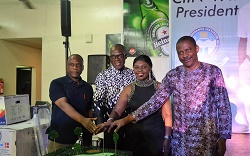 Members of the prestigious Ikeja Golf Club have endorsed Eddie Efekoha, a foremost member of the club, by stating their confidence in his ability to bring growth and engender stakeholder participation during his tenure as the 49th president and chairman of Council of the Chartered Insurance Institute of Nigeria (CIIN).

The golfers, at a dinner organized in honour of Mr Eddie Efekoha at the Club house of the Ikeja Golf Club, stated he had distinguished himself as a member of the club and in the Insurance industry and therefore his investiture as the president was fitting recognition for a man who had become the epitome of focus, commitment and a yardstick for measuring distinction in craft.

Bola Temowo, captain, Ikeja Golf Club said Efekoha was a  committed golfer who wore his heart on his sleeve on the golf course and in whatever he set his mind on doing. He also touched on Mr Efekoha’s love for family as a unifying factor and stated that he was sure the New President would bring all his sterling traits to bear in moving the Institute forward.  Mr Temowo, ended by pointing out that there was considerable representation of the Institute at the Club, assuring Mr Efekoha of the club’s support throughout his tenure.

Mr Efekoha had stated earlier on during the CIIN investiture ceremony proper which was held in Lagos, that his tenure would see him focus on ‘Advancing Insurance Education and Professionalism’.

He opined that continuity was a key factor in ensuring defined growth and as such, he would build on the existing foundations laid by his predecessors in addition to embarking on new projects and plans.

The Dinner was the climax of a day of celebrations which included a golf tournament in honour of Mr Efekoha.