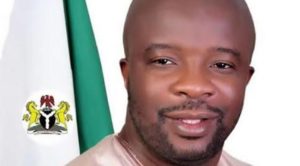 Federal lawmaker, Tony Nwulu Tuesday picked the nomination and expression of interest forms to vie for the Imo State governorship election on the platform of the United Progressive Party (UPP).
Nwulu, who was received at the party’s National secretariat in Abuja by the National chairman, Chekwas Okorie, pledged to adhere to the rule of law when elected as the next governor.

He also said he would revive the ailing and redundant Imo economy to put back smiles on the faces of Imo people.
It would be recalled that the governorship aspirant initiated the Not Too Young To Run bill on the floor of the House of Representatives which was signed into law by President Muhammadu Buhari.

The Act encourages active youth involvement in governance and leadership in Nigeria.

The lawmaker, who hails from Ezinihitee Mbaise in Imo State, is representing Oshodi/Isolo Federal Constituency of Lagos State in the House of Representatives.
Further, he assured that a UPP led Government in Imo State will take proactive steps to restore its lost glory.

He said, “The UPP hold out greater promise for Imo people. The symbol of the party which is the tiger symbolizes strength and power. We have come to take our State back. And only the strong together with the resolve of Imo people can achieve this. The UPP has been energized and fully prepared to take over power in Imo State in 2019. We are committed to enthroning genuine leadership, accountability, responsiveness and transparency in government.

“The people has the right to chose whosoever they want. And I am sure that their chose will be Me. We have had several maladministration, so the first thing is to ensure the rule of law and to strengthen the institutions and we begin to talk about developments. We already have out blueprints and I can assure you that we will follow it up and in the next couple of months Imo people will see changes.

“On security, when the youths are gainfully employed security threats will reduced. They will stay away from crime. For us to address unemployment we have to place something better on the table. As we are hoping to attract investors we need to tackle crime to achieve that. When I assume power Imo State will not only be crime free but it will become the safest.”