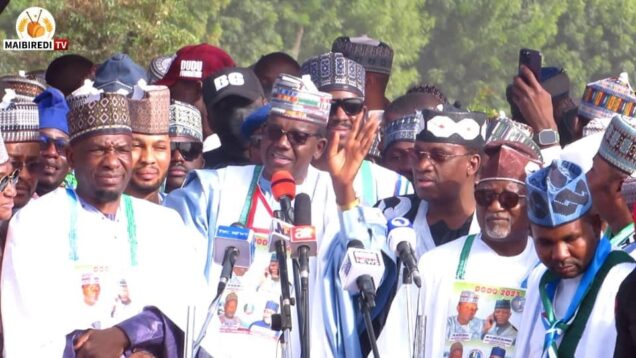 Gov. Bello Matawalle of Zamfara amidst massive crowd inaugurated his re-election campaign in Kaura Namoda Local Government of the State on Tuesday

Gov. Bello Matawalle of Zamfara on Tuesday amidst massive crowd inaugurated his re-election campaign in Kaura Namoda Local Government promising to completely tackle the over decade-long insecurity in the state.

Matawalle, who was supported at the campaign kick-off by all the past Governors of the state promised to create more employment opportunities for the youths and women to address poverty in the state.

He said that, if reelected in 2023, he would turn the state into an investment destination of choice with massive infrastructure, among other development strides.

The governor, who was vividly elated at the grand reception by the mammoth crowd of supporters from across the state promised not to let the people down.

Matawalle said he was impressed by the support and rallying around with a single voice among the political class of Zamfara.

He said that the feat of rallying all erstwhile ”political warlords” in the state to board one ship was a step towards sustainable peace and a path to meaningful development in the state.

The governor promised to consolidate the peace in the state and spread developmental projects across all communities, if elected for the second in 2023.

Matawalle commended the people of the state for standing by his administration during the trying times and fight against banditry and kidnapping, among other crimes.

The governor applauded what he described as ”political gladiators of Zamfara that attended the epochal event that threw the entire city of Kaura Namoda and its environs into a frenzy.”

Former Governors Ahmad Sani Yarima and Mahmuda Aliyu- Shinkafi called on the supporters to vote for the All Progressives Congress (APC) for continuity.

They told the crowd that all projects and programmes started by the Matawalle administration would be completed and new ones would initiated, if he is reelected.

They both commended Matawalle for embracing everyone into the APC fold after even as he eventually took over the machinery of the party in the state.

Former Governor Abdulazeez Yari and chairman of Matawalle’s re-election campaign council called for total support to ensure the return of Matawalle to sustain his laudable programmes.

He said that for the first time, the entire political class of Zamfara had united to support the Matawalle re-election bid.

Yari advised the supporters to vote the APC back in the state, adding, ”the present situation in Zamfara called for a revert to the 1999 situation where the political class spoke with one voice.”