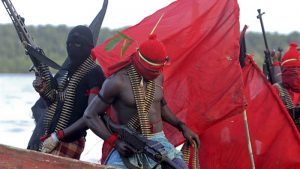 Reports reaching us indicate that the Movement for the emancipation of the Niger-Delta (MEND), has claimed responsibility for the continuous vandal attack oil pipelines that runs through Ishawo, Ikororodu, some parts of Abeokuta, Sagamu, Ijebu Ode among other areas.

Our investigation reveals that the militants have vowed to avenge the death of their members killed during attack by the Joint Task Force(JTF). Before the intervention of the JTF, members of Oodua Peoples Congress (OPC) have been the ones guiding and securing the pipelines.

The MEND leader, Chief Government Ekpemupolo (Tompolo), stated that the activities of some community members collaborating with security forces in thwarting their operations have not gone unnoticed.

He therefore vowed that those involved would be dealt with and chased down to wherever they have fled to; saying they have what it takes and the resources to fish them out.

Earlier, Government Ekpemupolo had escaped from police custody; with sources confirming that money must have exchanged hands between police rank and file, hence; making such an escape possible. However, the police boss summoned all the officers in charge for questioning.

This comes as many Nigerians continue to complain about lack of justice system in Nigeria with many killings and assassinations going unsolved, hence confirming how depressing and unaccountable the nation’s justice system is.

The MEND leader had on Monday spoke from hiding that attack on oil and gas facilities in the Niger Delta region will continue unabated and extend to all the regions in the country that oil pipelines runs through; bragging that with money and right connection in this country nothing is impossible.

The group’s efforts are directed towards knocking down of oil production in the Niger-Delta region, while claiming to expose exploitation and oppression of the people of the Niger-Delta and devastation of the natural environment as a result of public-private partnerships between the government and corporations involved in the production of oil in the Niger Delta.

MEND composition included members of the Ijaw who have been accusing government and oversea oil firms with promoting massive economic inequalities, fraud and environmental degradation.

MEND’s methods include kidnap-for-ransom of oil workers, staging armed assaults on production sites, pipeline destruction, murder of Nigerian police officers, and draining off of oil and sell it to the black market.