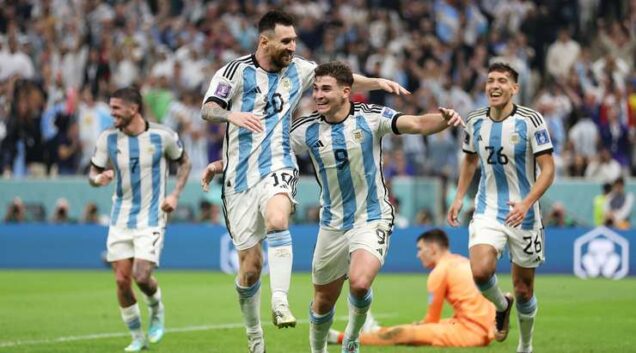 Lionel Messi hailed Argentina’s resilience after his majestic display against Croatia ensured a World Cup that began with defeat to Saudi Arabia could end in glory.

Messi recorded a goal and an assist as Argentina posted a 3-0 win over Croatia at Lusail Stadium on Tuesday to reach their sixth World Cup final – a tally only bettered by Germany (eight).

Having opened the scoring from the penalty spot in the first half, Messi rolled back the years with a remarkable assist as Julian Alvarez completed his brace after the break, beating Josko Gvardiol twice before teeing up a simple finish for the Manchester City forward.

Messi now has the chance to cap his incredible career by lifting football’s biggest prize, a prospect that appeared unlikely when Argentina lost their Group C opener three weeks ago.

The 35-year-old reflected on that surprise defeat after Tuesday’s victory, saying Argentina channelled their disappointment to rescue their tournament.

“I’d say the first game was a hard blow for all of us because we had been unbeaten in 36 matches. To start it like that was a hard blow,” Messi said in a post-match press conference.

“We didn’t think we’d lose to Saudi. It was an acid test, but we’ve shown how strong we are.

“It was very difficult what we did because every match has been a final and this brings a mental load. We were aware if we didn’t win then everything would be more complicated.

“We’ve played five finals and, luckily enough, been able to win them. I hope this will be the same for the final. Internally we were confident we’d make it as we know what we are capable of.

“Yes, we lost the first match because of fine details, but that helped us to be stronger and to grow in the tournament and internally as a squad.”

Croatia bested Argentina’s rivals Brazil in a tense penalty shoot-out in the previous round, but Messi felt the Albiceleste’s intelligence and willingness to “suffer” was the key against experienced opponents.

“I would say this squad, beyond the collective strengths, is very intelligent and wise, we know how to read the game and every moment,” Messi said.

“It’s something the coach said before, it’s a very intelligent squad. We know when to suffer and when to press. We know how to read the games, we know what to do in every moment, how to win.”

Messi has now recorded eight goal involvements (five goals, three assists) in Qatar, moving ahead of Kylian Mbappe (five goals, two assists) prior to France’s semi-final meeting with Morocco, and he is enjoying every minute of the campaign.

“Well, what I can say is I’m enjoying this a lot, I’m feeling really good, I feel strong enough to face every match,” Messi added.

“The previous game was a big sacrifice, it went to extra time, that wasn’t easy. Today we’re tired, but we pooled our strengths to earn this victory.

“Personally, I can say I feel very happy in this whole World Cup, I’m enjoying it a lot, and luckily I am able to help the whole squad make things happen.”