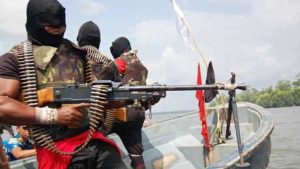 A Non-governmental Organisation, Media Initiative against Injustice, Violence and Corruption- MIIVOC has called on Rivers State Governor, Ezenwo Nyesom Wike to step in and resolve the difference between the Egi Community in Ogba Egbema Ndoni Local Government Area of the State and Total Oil Company in the area before it degenerates.

Executive Director of MIIVOC, Dr. Walter Duru, who made the call in a Statement made available to newsmen, in Port Harcourt on Wednesday, warned that the lingering disagreement between the two parties could worsen the already threatened security situation in the area.

“I read in the papers recently where a group that identified itself as Egi Freedom Fighters gave conditions for acceptance of the state government’s amnesty. Among their demands are: the rebuilding of houses of members of the community, allegedly destroyed by the military at the instance of the Oil Company; employment and Scholarship opportunities, skills acquisition, capacity development, among others. I have not read any reaction from Total Oil Company, accepting that they sent the Military to destroy the people’s houses or denying it. It does not appear to me like a good strategy. Although they did not indict the state government, the government’s response so far could be better.”

“I am afraid that if the parties do not find a way to resolve the issues, the tension in the area could be further heightened. ONELGA LGA is already tensed. Omoku community is today a shadow of itself. Government must be strategic in its engagements, to ensure that the near culture of violence in the area is not sustained. The group’s demands, apart from that of rebuilding of houses, are not different from the age-long issues and causes of agitation in the Niger Delta. The group has listed their demands. There has to be a way out. Let the government intervene.”

“The State governor, as Chief Security Officer of the State must step in, reach out to the parties and, if possible, involve an independent Civil Society Organisation to broker peace among the parties. Whatever strategy to be adopted must be such that can stand the test of time and ensure sustainable peace in the area. “

Continuing, Duru, a Communication and Public Relations expert argued that it is easier to prevent the escalation of the issue, than to manage the crises when it eventually escalates, urging the government to act urgently.

“The state government’s amnesty programme appears to be working. Many have embraced it. However, borrowing a leaf from the parable of the lost sheep in the Bible, Governor Wike, as father of the state should look into the matter dispassionately and ensure that justice is done. Let a platform be created for dialogue between the community and the company so the issues would be addressed. Applying force in the matter could backfire. Let dialogue be the instrument.”

Dr. Walter Duru is Chairman, Board of the Freedom of Information Coalition, Nigeria, as well as a member of the Federal Government’s Steering Committee on the Open Government Partnership.